SA remain on course to a series whitewash over Pakistan 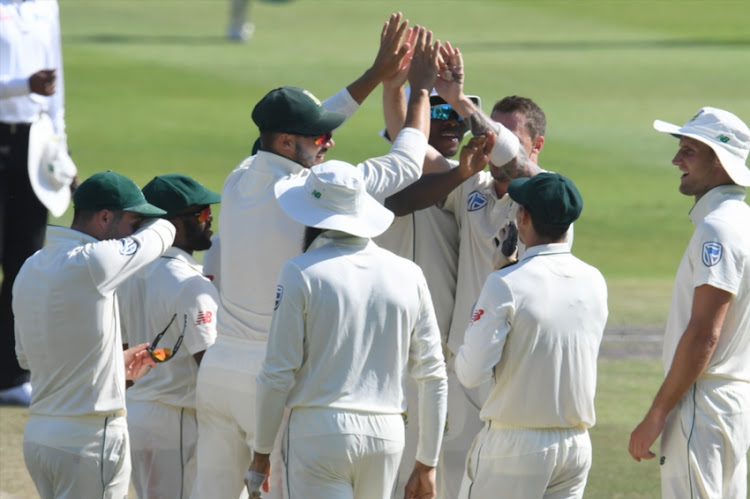 Dale Steyn of the Proteas celebrates the wicket of Imam-ul-Haq of Pakista with his team mates during day 3 of the 3rd Castle Lager Test match between South Africa and Pakistan at Bidvest Wanderers Stadium on January 13, 2018 in Johannesburg, South Africa.
Image: Lee Warren/Gallo Images

South Africa remain on course to a comprehensive 3-0 victory and series whitewash over Pakistan after they restricted their visitors to 153/3 after 40 overs at close of day three of this third and final Test match on Sunday.

When the umpires called stumps‚ Pakistan still needed 228 runs to stun South Africa and win this match and their mission looks unlikely as they have already lost key batsmen in Imam-ul-Haq‚ Shan Masood and Azhar Ali.

They will resume on the fourth day on Monday against the might of fast bowlers Dale Steyn‚ Kagiso Rabada‚ Vernon Philander and Duanne Olivier who have restricted them to less than 200 in four of the five completed innings so far.

Most of the batting work for Pakistan on Monday morning will be for unbeaten Asad Shafiq (48) and Babar Azam (17) who weathered the late fast bowling storm by South Africa on Sunday after they lost Ul-Haq‚ Masood and Azhar Ali for underwhelming scores of 35‚ 37 and 15 respectively.

Ul-Haq and Massod were victims of fired up Steyn inside 17 overs of their chase after they were set a gigantic target of 381 by South Africa and the last wicket to fall on the day was that of Azhar who was mesmerized by a ripper from Olivier.

With the wicket of Ul-Hag‚ Steyn clocked his 432nd wicket in 91 matches to move to tenth place on the leading Test wicket takers of all time and when he removed Massod he clocked his 50th wicket at Wanderers.

Before Pakistan went in to bat‚ they managed to bowl Proteas out for 303 with Quinton de Kock sizzling with a patient but stylish fourth century and his first in two years while premier batsman Hashim Amla made a telling contribution of 71.

Rabada was another notable contributor for the Proteas as he chipped in with a useful 21 and in the process outscored more affluent batsmen in stand-in captain Dean Elgar (5)‚ Theunis de Bruyn (7)‚ Zubayr Hamza (0) and Vernon Philander (14).

When South Africa ended their second innings‚ they set Pakistan a mammoth target of 381 runs and judging by the way they have batted‚ the Proteas may not even need more than two wickets to claim this victory.

With the ball‚ Pakistan’s best bowlers were Faheem Ashraf and Shadab Khan with three scalps each‚ Mohammad Amir with two and Mohammad Abbas and Hasan Ali who returned with one each for their troubles.