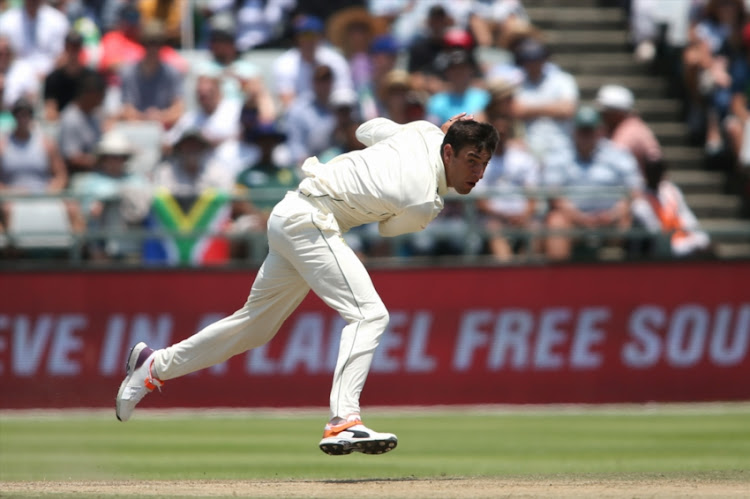 Proteas fast bowler Duanne Olivier says Hashim Amla and Quinton de Kock must bat as long as possible in the first session of the third day of the final Test on Sunday for South Africa to take the game away from Pakistan.

South Africa reached stumps after an eventful second day on Saturday on 135/5 after a lead of 212 runs with Amla and De Kock on respective scores of 42 and 34 and a promising partnership of 42 off 5.

“I can’t think of a specific target in my mind but Quinny (De Kock) and Hash (Amla) are still in there‚” he said at the close of play still fresh from claiming his third five wicket haul which took his tally of wickets in this series to 21.

“We just need to bat as long as possible and later bring on our bowlers in the game in this wicket that is deteriorating.

"We need a few partnerships‚ especially from the lower order‚ because that will put us in a good position.”

Pakistan captain Sarfraz Ahmed responded and said they are still in the game.

Ahmed said he doesn’t think that South Africa will score more runs than the visitors in the second innings.

“They took eight wickets and scored some the runs but we bowled really well until the last 45 minutes of the day where we were not up to the mark‚" he said.

"Our bowling attack is bowling in patches but I don’t think that South Africa will score more runs than us.”

Olivier‚ who at some stage was on a hat-trick on Saturday and now holds the record of the most wickets by a South African bowler in a series against Pakistan‚ admitted that it was frustrating in the first hour after where they dropped four catches‚ missed a stumping and a run-out.

“It is frustrating from a team point of view but it happens‚" he said.

"For us it was just to regroup and move on from it as soon as possible.

"We know what went wrong‚ it was not our best hour and after drinks we bowled better and we were rewarded.

"Going forward‚ it will be just to try and be consistent and with good energy‚ there is still enough assistance on the wicket for the bowlers.”