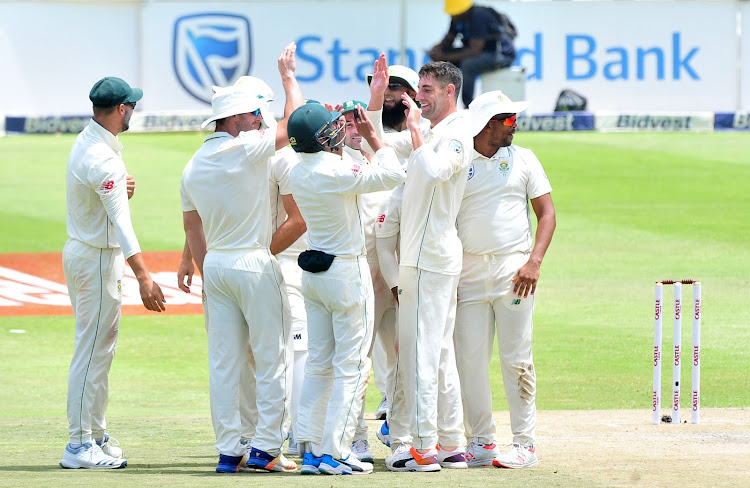 Duanne Olivier claimed his third five wicket haul and also his 21st wicket of the series during the third day of third and final Test at the Bidvest Wanderers Stadium in Johannesburg on January 12 2018.
Image: Samuel Shivambu/BackpagePix

South Africa managed to negotiate through what turned out to be an eventful day two against Pakistan where they took eight wickets and established a commanding lead of 212 runs to take control of this third and final Test match in Johannesburg.

When umpires called stumps on Saturday afternoon, the Proteas were sitting on 135/5 after 37 overs with premier batsman Hashim Amla and Quinton de Kock on scores of 42 and 34 respectively.

Amla and De Kock were going nicely with a partnership of 42 off 51 and rebuilding South Africa’s second innings after they lost Dean Elgar before tea and Aiden Markram, Theunis de Bruyn, Zubayr Hamza and Temba Bavuma during the final session.

The day started with Pakistan on 17/2 and Proteas went on to bowl them out for 185 after lunch still trailing by 77 runs where Duanne Olivier claimed his third five wicket haul and also his 21st wicket of the series.

Olivier, who was at some stage on a hat-trick, now holds the record of the most wickets by a South African bowler in a series against Pakistan but he was not responsible for the damage alone as Kagiso Rabada contributed two scalps while Vernon Philander returned with the other one.

After dismantling Pakistan, who have only managed to score over 200 once in five innings so far in this series, Proteas’ mission of increasing their advantage did not take off as planned as they lost stand-in captain Elgar for five runs in the fifth over.

Wickets continued to tumble in the early stages of the third session where South Africa lost Markram, De Bruyn and Hamza in quick succession who departed without any real meaningful contribution on the game as the Proteas slumped to 45/4 after 15 overs.

The first to go after tea was Markram on 21 when he was caught by Sarfraz Ahmed from the bowling of Muhammad Abbas and Faheem Ashraf turned the screws with the scalps of struggling De Bruyn (7) and Hamza who departed without scoring.

The bleeding stopped for a while with Amla and Bavuma combining for a partnership of 48 but it was broken when the latter was caught by Sarfraz Ahmed from the bowling of Shadab Khan having scored 23.

Sarfraz’s catch was his 8th of the match and the best by any Pakistani against South Africa and Faheem Ashraf was their best bowler of the second innings as he returned with the two scalps of De Bruyn and Hamza while Amir, Abbas and Shadab Khan got one each.