Debutant Hamza lights up Wanderers as Proteas pull ahead 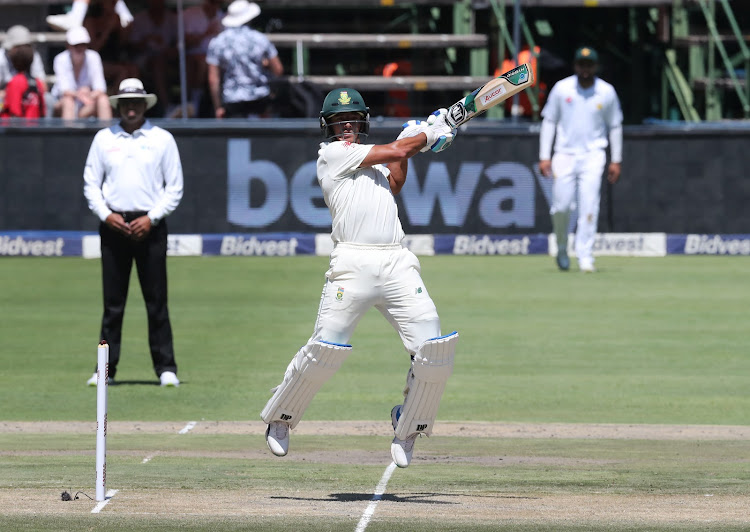 Zubayr Hamza of the Proteas bats during Day 1 of the Castle Lager Test Series match between South Africa and Pakistan at the Wanderers, Johannesburg on January 11 2019.
Image: Gavin Barker/BackpagePix

Debutant Zubayr Hamza got the Bullring crowd excited with his positive intent and a variety of strokes as South Africa reached tea on day one of the third and final Test against Pakistan with a commanding score of 226/3 after 58 overs.

When they went to the short break‚ Hamza was unbeaten on 38 off 46 but most importantly Theunis de Bruyn was closing in on his maiden Test half-century with a score of 48 off 76. He will take confidence after a run of low scores in this series.

Though De Bruyn took time to carefully construct his innings‚ which included nine boundaries‚ Hamza did not waste time to sample his first international match as he hit the first maximum of the day that was immediately followed by a boundary the next ball‚ shortly after he arrived at the crease.

At some stage‚ Hamza was in ODI mode with a score of 21 off 21 and his partnership with De Bruyn at tea amounted to 72 off 92 balls.

They will be looking to continue frustrating the Pakistani bowlers and continuing to pile on the runs.

Pakistan will be motivated by the fact that‚ unlike in the first session where they only managed the wicket of stand-in captain Dean Elgar‚ they came back stronger after lunch to dismiss Aiden Markram (90) and Hashim Amla (41).

The breakthrough after lunch came when Sarfraz Ahmed dived at full length to catch an edge from Makram‚ who unfortunately fell 10 runs shy of his fifth Test hundred from the bowling of Ashraf Faheem.

Markram‚ who looked solid with the bat during his well-taken knock that included 16 boundaries‚ shared a good partnership of 126 with senior partner Amla and suffered his third dismissal in the 90s.

The second wicket to fall in the second session was when Amla’s thick outside edge went straight to first slip where Asad Shafiq took a simple catch from the bowling of Shadab Khan‚ who was rewarded for his patience.

The familiar sight of Albie Morkel on the South African cricket fields is now in the past after the highly respected and former Proteas all-rounder ...
Sport
2 years ago

What does the Wanderers have in store for SA and Pakistan after last year's pitch fiasco?