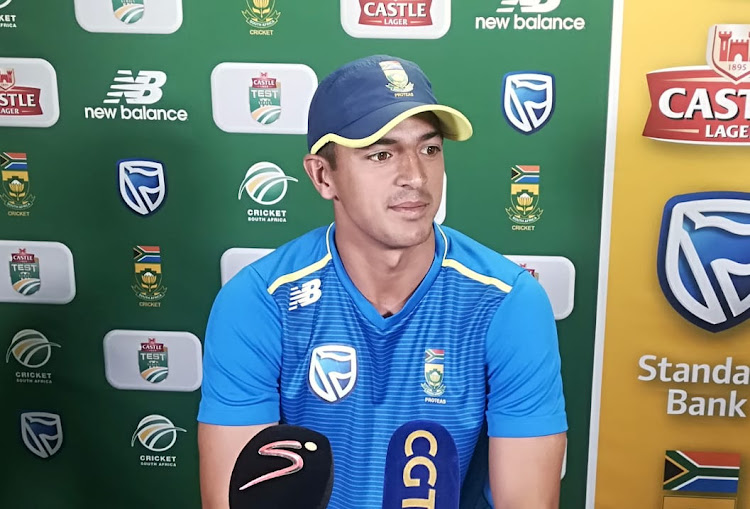 Zubayr Hamza will not be the 100th man to play Test cricket for South Africa even if he is in the XI to take on Pakistan at the Wanderers on Friday.

No. 100 was Norman Reid‚ a Western Province allrounder and an Oxford rugby blue who scored 11 and six and took 2/63 against Australia at Newlands in November 1921 — his only Test.

If Hamza cracks the nod‚ which on the strength of him being wheeled out for a press conference on Wednesday is likely‚ he will be No. 335.

“When I look up to someone it’s not necessarily the person they are‚” Hamza told reporters.

“It’s a combination of a whole lot of people and what they bring to the game.”

He described his own game as “at times free-flowing but also willing to graft — never looking the prettiest but I take pride out of the innings where there’s a lot of struggle”.

By the sound of him Hamza is as South African as koesisters. Or koeksisters.

South Africans who harbour a sweet tooth will tell you those are not nearly the same thing. But they are part of the same fractured national culture.

What Hamza would be if he plays on Friday is the 100th Test player capped by something called the Proteas‚ which is what Cricket South Africa’s marketing department would prefer you to call what you might prefer to think of as the national team.

Both are flawed concepts. The Proteas are little beyond logos and lip service‚ and no mere sports team could possibly represent a nation. That’s all war is good for.

But the idea that the next oke who makes his Test debut for Faf du Plessis’ side will be the 100th something or other fits neatly with the sorry state of public discourse in South Africa‚ where the slaughtering of a sheep on a beach becomes more prominent than people on the same beach being treated like animals by hired goons.

Instead of learning from the list of 334 men who have played Test cricket for a team that‚ rightly or not‚ call themselves South Africa‚ we try to fiddle the numbers. The lessons are there for all to see‚ if we would only look.

The first 247 of the 334 were white‚ an indelible stain on our history and a fact that still gets in the way of cricket being recognised for what it is: a sport played by South Africans of all flavours.

No. 248 was Omar Henry but another 20 would be picked before Makhaya Ntini became the first black African selected.

Seventy-six players have been blooded since the end of white rule in 1994. Fifty of them — 65.8% — have been of the same race as an estimated 7.8% of South Africa’s population: white.

Whichever way you spin it the nonsense that the integrity of South Africa’s team is being undermined by racially skewed selection remains nonsense.

Some of the 334’s stories are more complicated than others’. No. 235‚ Egyptian-born Athanasios Traicos‚ better known by his second name‚ John‚ had three Tests for South Africa in 1970 and four for Zimbabwe in 1992 and 1993.

Bloemfontein-born Kepler Wessels‚ No. 246‚ earned 24 caps for Australia before playing 16 for South Africa.

No. 308 is Alviro Petersen‚ who has returned to commentary after serving a two-year ban for his role in the spot-fixing scandal that blighted the 2015 franchise T20 competition.

The fact that he’s back in the game will curdle the blood of some cricket people. But he’s done the time for his crime. How would it be fair to punish him further?

Petersen is doing better than Norman Reid‚ who‚ according to his Wisden obituary‚ “died at Cape Town in tragic circumstances in June [1947]‚ aged 56”.

Closer to the truth is that Reid was shot through the head in his bed by his wife‚ who then killed herself.