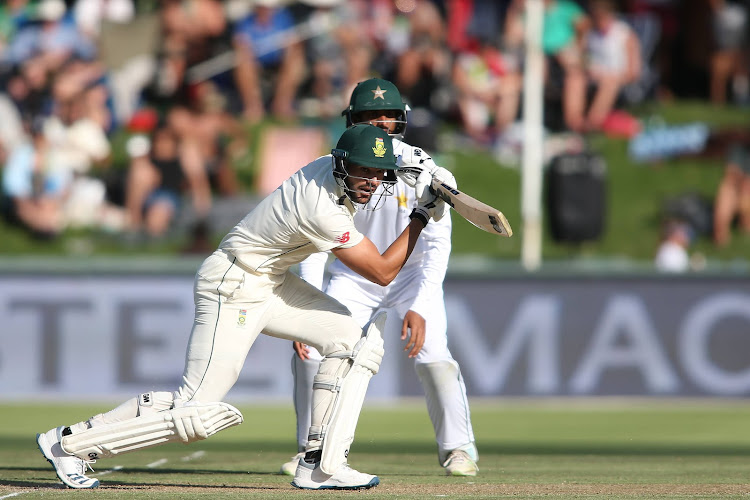 For the sake of the three-Test series it had been hoped that Pakistan could close the gap on South Africa in the second Test here on Thursday.

The reality after day one however is that Pakistan are drifting into a wider orbit and that it would take considerable jet-propelled missions to bring them closer.

Having dismissed the tourists for a paltry 177 after winning the toss‚ South Africa reached 123/2 at the close leaving them with every prospect of pressing home their advantage on the second day.

They may have been in an even more commanding position had Aiden Markram not been bowled by what turned out to be the last delivery of the day for a well played 78.

Markram‚ who struggled for runs in the first Test in Centurion‚ looked far more assured here as he helped steer the hosts into a position of relative comfort. He had played with authority until he was bowled by one that kept a tad low by Shan Masood.

A few eyebrows were raised when South Africa captain Faf du Plessis won the toss and opted to bowl‚ but by lunch on the first day of the second Test ...
Sport
3 years ago

While Markram cashed in as the shadows lengthened‚ it was the South African attack‚ with Duanne Olivier again at its sharpest edge‚ that put Pakistan to the sword.

Olivier‚ South Africa’s destroyer in chief in Centurion in the first Test‚ bowled with similar‚ if you like‚ venom‚ on Thursday. He almost unrelentingly banged it in short and profited as the visiting batsmen struggled to ride the steep bounce.

Yes‚ they ducked and swerved here and there‚ but the reality is they often looked like ducks out of water. The short ball again proved their undoing as Oliver took 4/48‚ while Dale Steyn chipped in with 3/48‚ albeit through more orthodox means.

Indeed the Pakistan first innings showed distinct signs of imploding at 54/5 before captain Shafraz Ahmed had a timely return to the form with a belligerent 56 that included nine fours.

He struck nine fours before he was caught behind‚ before the fall of Yasir Shah and Muhammad Abbas dramatically reduced Pakistan’s prospects of posting a vaguely competitive first innings total.

Under the cosh Pakistan captain Safraz Ahmed made a return to form when he crafted a gritty half century to keep South Africa momentarily at bay on ...
Sport
3 years ago

By the time their ninth wicket went down and the tea break was extended the Pakistan innings had been reduced to farce after South Africa won the toss and elected to bowl.

Indeed eyebrows were raised when South Africa captain Faf du Plessis won the toss and opted to field and although the first few overs went by without much incident once the breakthrough came‚ there was little to stop the South African momentum.

Once Olivier was let loose in the 12th over the tourists were on their toes in every sense.

The big talking point ahead of this Test series was Pakistan’s inability against the short stuff. Their preparation‚ which included a three-day match in Benoni‚ now seems hopelessly inadequate one day into the second Test.

To be fair there is not a lot they could have done differently and you fear it will be their fighting spirit‚ more than their technique‚ that will determine‚ if not the path‚ then the time of conclusion of this Test match.