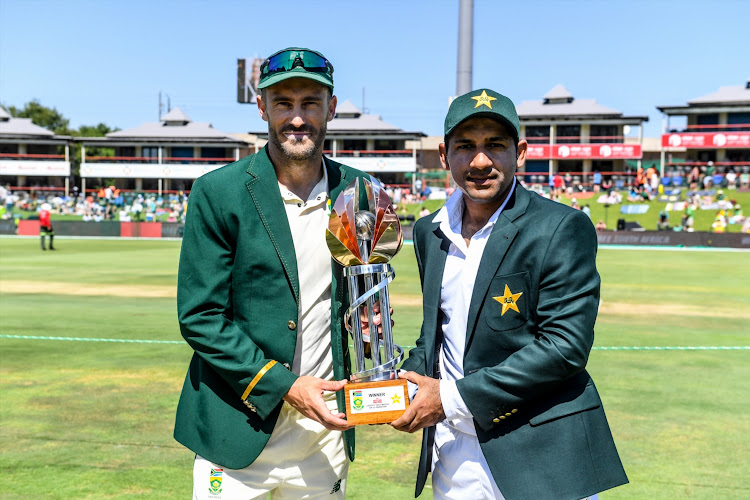 Pakistan captain Sarfraz Ahmed (R) pose with the Castle Lager Test trophy with his South African counterpart Faf du Plessis (L) at the coin toss during day 1 of the first of the three-match Test series at SuperSport Park in Centurion on December 26 2018. SA won the first match by six wickets shortly before tea on day three.
Image: Sydney Seshibedi

South Africa ended 2018 like they started it — by beating a team from the subcontinent with time to spare.

They downed India by 72 runs in four days at Newlands in January‚ and completed victory by six wickets over Pakistan inside three days at Centurion on Friday.

But there was a world of contrast between those two poles‚ encompassing the retirements of AB de Villiers and Morné Morkel‚ a series against Australia that proved again that fact is exponentially stranger than fiction‚ a disappointing tour to Sri Lanka‚ an instantly forgotten irrelevance against Zimbabwe‚ white-ball success in Australia‚ and getting over the first hurdle against the Pakistanis.

South Africa won 19 of their 34 games — six of 10 Tests‚ nine of 17 one-day internationals‚ four of seven T20s — which equates to a slightly below-average year for them.

But that’s at best a rough measure that doesn’t take into account important variables like their own and their opponents’ relative strengths and weaknesses‚ changing conditions‚ and the fact that South Africa played almost half of their post-isolation games — 48.18% — before they undertook their first T20.

Virat Kohli’s 153 on an unusually sluggish Centurion surface‚ the result of heat wave that killed the extra grass the South Africans had asked to be left on the pitch‚ was the only century of the India series.

But Hardik Pandya’s 95-ball 93 at Newlands was the most entertaining and memorable innings of a series that saw Lungi Ngidi take 7/90 on debut‚ slow Centurion surface and all‚ and Vernon Philander‚ Mohammed Shami and Kagiso Rabada claim 15 wickets each.

The series was conducted in good humour‚ even allowing for Kohli’s constant pushing at the corners of the code of conduct’s envelope.

Indeed at the Wanderers‚ where a pitch that veered uncomfortably close to being declared dangerous saw play temporarily suspended‚ the Indians refused to complain‚ earning respect from South Africa’s not easily impressed cricket public.

Nothing of the sort could be said about the next tour to reach their shores.

Even grizzled veterans of South Africa’s emotionally charged struggles with the Australia over the years couldn’t have imagined how feral last summer’s episode would become.

Matters started to lurch out of control in the first Test at Kingsmead‚ where David Warner disgraced himself‚ his team and the game with some of the worst behaviour yet seen on a cricket ground. And all in the name of getting under an opponent’s skin.

When that opponent‚ Quinton de Kock‚ lashed out verbally in retaliation‚ Warner was physically restrained from escalating the confrontation to an uglier level.

South Africans who celebrated Dali Mpofu getting Rabada off the hook missed the point: they should have been shocked and disappointed that a heavyweight lawyer had to be summoned from attending to more important issues in the real world to help resolve an entirely avoidable incident in the unreal and insignificant world of cricket.

Thus the knife edge that glinted in the sunlight that dared peep over Table Mountain had been sharpened in Durban and Port Elizabeth.

Thick cloud had scudded over the scene by the time Cameron Bancroft‚ under Warner’s direction and with Smith’s blessing‚ was rumbled for tampering with the ball and hiding the smoking gun — a bit of sandpaper — next to his own balls in his underwear.

The resultant swell of disgust in South Africa was overwhelmed by the tsunami of outrage that swept in from Australia‚ where even the prime minister weighed in.

More surrealism followed in the last match of the series at the Wanderers‚ and not only because a suddenly soft and cuddly Australia team — with Warner‚ Smith and Bancroft excised — were led by Tim Paine‚ seemingly a thoroughly nice man who prompted the players to shake hands before the match.

Two other reasons South Africans were pinching themselves were that the game would be the last international to feature De Villiers and Morkel.

De Villiers’ retirement announcement had roused a hurricane of alarm‚ Morkel’s a poignance seen too rarely in South African society.

One was a comet of a cricketer who often seemed at odds with his own celebrity‚ the other an unimpeachably decent bloke who happened to be able to bowl like a champion.

Could anything top all that in what was left of South Africa’s year? No.

Tours to Sri Lanka‚ which despite its violent history is for visitors a lovely place filled with welcoming people‚ are grinding marathons of heat and dust.

Theunis de Bruyn made a century and Temba Bavuma a half-century‚ and Keshav Maharaj was the joint leading wicket-taker.

But both Tests were lost. South Africa bounced back by winning the first three of five ODIs and losing a throwaway T20.

Predictably‚ Zimbabwe were outclassed in the three ODIs and two T20s they played in South Africa.

Difficult batting conditions in the first two one-dayers disguised that truth but their least embarrassing performance came in the third T20 — because it was washed out without a ball bowled.

A tour of three ODIs and another random T20 to Australia wouldn’t have featured as prominently as it did were it not for what had gone before.

This time there was no drama‚ and South Africa won the ODI series 2-1 on the back of centuries by David Miller and Du Plessis‚ and seven wickets each by Rabada and Dale Steyn in a convincing step back on his long and winding return from injury.

It was Steyn‚ too‚ who gave South Africans reason to be cheerful at Centurion on Wednesday.

In the seventh over‚ he angled a delivery across the left-handed Fakhar Zaman‚ who edged to Elgar at second slip.

With that Steyn had his 422nd Test wicket‚ one more than Shaun Pollock‚ until then South Africa’s champion bowler.

A couple of broken shoulders and a ripped heel ligament meant that was only the eighth wicket Steyn had claimed since November 2016‚ and he wouldn’t have been human if he hadn’t wondered if he would ever return to crown his career with the record he deserves.