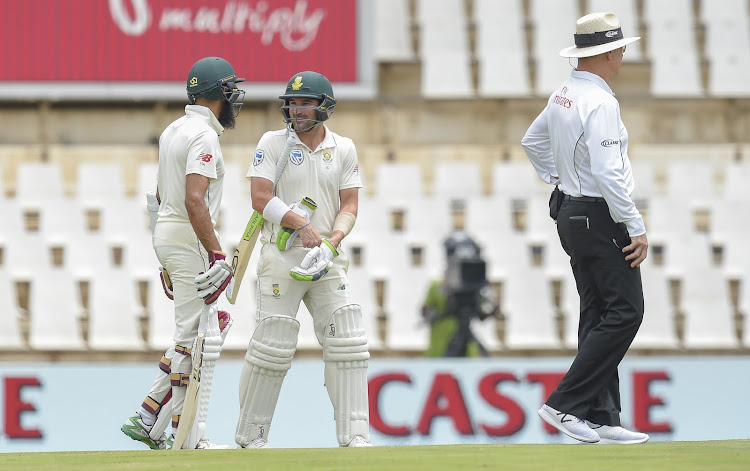 The Proteas went to lunch on day three of the Boxing Day Test on 81/1 after 26 overs and needing a further 68 runs to win on Friday in Centurion.

The South Africans started the day needing 149 runs after they bowled out Pakistan in the second innings for a below par 190 and if there is no collapse in the second session‚ they are on course to win by a big margin.

When play resumes after the lunch‚ Hashim Amla and Dean Elgar will continue batting on 45 and 32 respectively and their mission will be to try and wrap up this match in the second session and give South Africa a 1-0 lead in this three match series.

The Proteas have so far only lost the wicket of Aiden Markram who was trapped in front by Hasan Ali without scoring in the second over.

The loss of Markram contributed to the slow start to the match as it took 3.3 overs to get the scoreboard ticking and it came in the form of four byes when a delivery by Hassan Ali found its way to the boundary past wicketkeeper Sarfraz Ahmed.

Amla was later the first South African to put something on the scoreboard with successive boundaries in the sixth over.

There was a moment of controversy in the ninth over when TV umpire Joel Wilson ruled that Azhar Ali’s catch at first slip from the bowling of Shaheen Afridi to Dean Elgar was illegal and that decision irked the Pakistanis.

Meanwhile‚ Pakistan Cricket Board (PCB) issued a statement on Friday morning refuting reports of a dressing room burst up between coach Mickey Arthur and the players after day two’s play.

“The Pakistan team management led by Manager Talat Ali strongly refutes the baseless allegations leveled against head coach Mickey Arthur on his supposed 'angry behaviour' at the end of day two of the ongoing Test match against South Africa in Centurion.

“As per the norm‚ Mickey held a debriefing meeting at the end of the day's play which was held in a cordial atmosphere with inputs from team members and management as is the usual practice.

"Any speculation about the coach's angry behaviour towards the players is grossly exaggerated.

"The head coach‚ team management‚ captain and all team members are totally united with a singular aim of producing positive results.

"The team manager and rest of the management hope that media would refrain from speculating on the matter.”