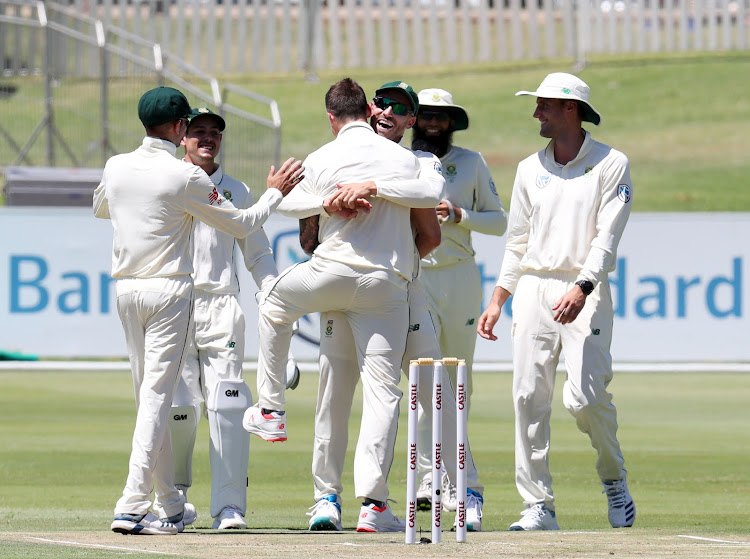 Dale Steyn is given a congratulatory hug from his captain Faf du Plessis after taking his record-breaking 422nd wicket to become SA's leading wicket taker on the opening day of the first Test between the Proteas and Pakistan at SuperSport Park in Centurion on Wednesday December 26 2018.
Image: Muzi Ntombela/BackpagePix

The opening day of the Boxing Day Test between South Africa and Pakistan at Centurion  on Wednesday was supposed to be about record-breaking Dale Steyn but it turned out that some of his team-mates didn’t get the memo.

But fellow paceman Duanne Olivier and middle order batsman Temba Bavuma were not to be outdone.

Olivier‚ who only played in this Test match due to the unavailability of injured Vernon Philander and Lungi Ngidi‚ went on to claim career best figures of 6/37 in his 14 overs while Bavuma impressed with a patient knock of 38 off 47 balls.

With the help of Olivier’s impressive efforts‚ the Proteas managed to bowl out Pakistan for a below par score of 181 after 47 overs.

But the top four messed up the start of the chase until Theunis de Bruyn and Bavuma arrived to rebuild the innings with a crucial partnership of 69 off 109 balls.

Their partnership was broken late in the third session by Muhammad Amir with De Bruyn on 29 and South Africa on 127/5 after 36 overs and a first innings deficit of 54 runs at stumps.

Proteas coach Ottis Gibson will hope that nightwatchman Steyn and Bavuma increase their respective scores of 13 and 38 on Thursday to give South Africa the advantage.

While Olivier managed to improve his figures from 3/38‚ Steyn could not add to Zaman’s wicket and had to settle for a modest 1/66 in his 13 overs where he went at an expensive economy rate 5.08.

Other players who grabbed the limelight‚ albeit‚ for the wrong reasons‚ were Proteas top order batsmen Aiden Markram‚ Hashim Amla‚ Dean Elgar and Faf du Plessis as they contributed to the whooping 15 wickets that fell on the day to fast bowlers.

Markram (12) and Amla (8) were the first two wickets to fall for South Africa from the bowling of Azhar Ali and Amir respectively and they left South Africa on 43/2‚ but the worst was still to come.

The wickets of Elgar‚ who was looking good on 22‚ and captain Faf du Plessis‚ who disappointed with a golden duck‚ went down for the successive balls with South Africa’s score still on 43 and Pakistan’s bowler was Shaheen Afridi on a hat-trick.

The pick of the batsmen for Pakistan were Azam‚ whose knock of 71 included fifteen boundaries‚ Ali‚ who contributed 36‚ and Hasan Ali who was unbeaten on 21.

But they did not have enough support to mount a considerable score.