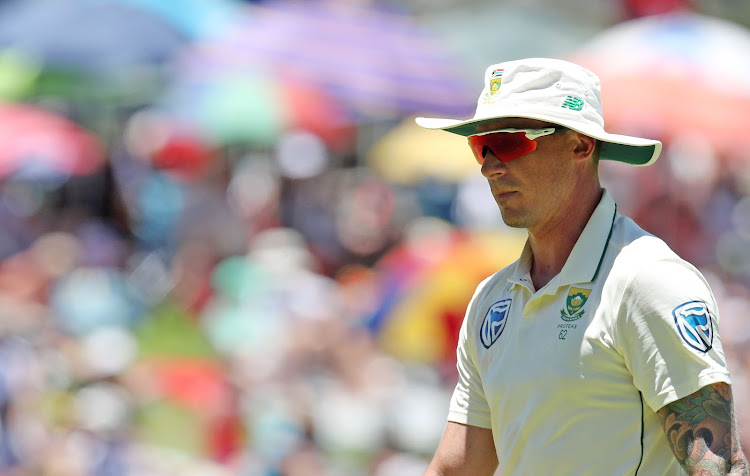 Equalling a record is one thing. Breaking it is quite another.

Just ask Dale Steyn who had to bowl 187 deliveries before advancing from a share of the South African record for the number of Test wickets‚ to being sole holder.

When he equalled Shaun Pollock on 421 Test scalps in July it was in the act of finishing the Sri Lankan second innings in the first Test in Galle.

He failed to take a wicket in the 28 overs he bowled in the next Test in Colombo and had bowled 18 deliveries on Wednesday on the first day of the first Test against Pakistan before Fakhar Zaman nicked the ball to third slip. Dean Elgar claimed the catch before triumphantly clutching the ball in his left hand in celebration.

Steyn was stoked and even Pollock‚ in one of the commentator’s booths‚ wore a wry smile as he acknowledged his record was now history.

An avid skateboarder in his youth‚ Steyn has operated on thin ice over the last few seasons.

Injury has severely restricted his activity. The orthopaedic upheaval has thankfully relented and the 35-year old in the build up to this Test stressed that his focus is not so much getting the elusive record breaking wicket‚ but to squeeze as much out of the remainder of his career.

That he would break the South African Test record looked unlikely when he made his debut against England in 2004. He toiled to figures of 2/117 in 25 overs in the first innings against England at St George’s Park but he did get the trophy wicket of Marcus Trescothick as his first Test scalp.

He was enthusiastically applauded when he got rid of Zaman on Wednesday but things didn’t happen for Steyn for the rest of the day. That he made little impact mattered little as the rude health of South Africa’s fast bowling reserves came to the fore.

Once the Phalaborwa Express had come and gone it was Duanne Olivier who grabbed the spotlight.

Olivier‚ who cracked the nod due to Lungi Ngidi’s absence through injury‚ took full advantage claiming a career best 6/37.

Earlier this season Olivier had credited his wife for his return to form with the ball and on Wednesday it was his nagging and unsettling hostility that rattled the tourists.

Unlike Steyn who returns to his mark with a spring in his step‚ Olivier seems to drag his slumped frame to the top of his mark. By the time he gathers in his delivery stride however he is all business and on Wednesday he meant it.

In searing 38-degree heat‚ he looked hell bent to minimise his exposure to the elements and by the time he claimed the last Pakistan wicket to usher in an early tea break‚ he had succeeded in that objective with aplomb.

Although not renowned for their devotion to the straight and narrow‚ the Pakistan attack did some nagging of their own as the shadows lengthened.

They attacked a narrow channel but the South African batters also failed to ride the inconsistent bounce.