Proteas have not asked for spicy pitches for the Pakistan Tests 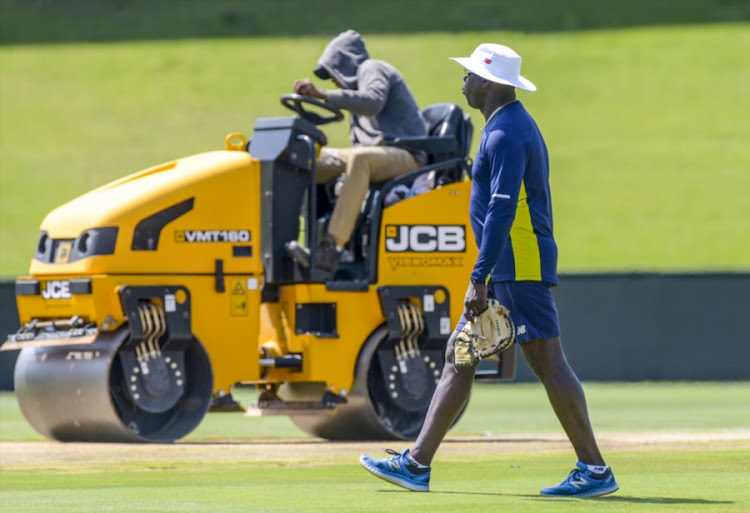 The Proteas head coach Ottis Gibson goes about his business as the pitch is being prepared too during the South African national men's cricket team training session and press conference at SuperSport Park on January 12, 2018 in Pretoria.
Image: Sydney Seshibedi/Gallo Images

Another team from the subcontinent is in town.

Does that mean another tap on ground staff’s shoulders from South Africa’s dressing room‚ asking for pitches that make the most of the home side’s strengths and exploit the visitors’ weaknesses?

It seems not‚ last season’s lesson would appear to have been learnt.

Asked on Thursday if the South Africans have been in touch to request a bespoke pitch‚ Gauteng Cricket Board chief executive Greg Fredericks said: “We’ve heard nothing from them at all.”

It was a pitch made to order to take opponents who had grown up on slow‚ turning surfaces as far out of their comfort zones as possible.

But the joke was on the South Africans late on the third day‚ when no less modest a purveyor of pace than Jasprit Bumrah managed to hit no less canny an operator than Dean Elgar on the grille of his helmet.

Enter the medics to administer treatment for the ninth time in the match.

Seven of their previous interventions had been to remedy raps on the gloves and once they came on to soothe the impact of a rib tickler.

All were caused by deliveries that had no business rising as sharply as they did.

The Elgar incident prompted match referee Andy Pycroft‚ a lawyer by profession‚ to sashay magisterially into the fray and onto the field and for play to be suspended.

That plunged Fredericks into a world of worry that the match would be abandoned because of a pitch officially deemed dangerous.

Happily for all concerned‚ the battered batters excepted‚ that didn’t happen and India won by 63 runs after tea on the fourth day.

That followed South Africa’s victory‚ by 135 runs‚ in the second Test in Centurion‚ where a teddy bear of a pitch took the game into a rare‚ for the venue‚ fifth day.

Despite their success‚ the South Africans were infuriated and said so plainly and repeatedly.

The Titans chief executive Jacques Faul admitted on Thursday that “we got the wicket wrong”‚ but he wasn’t going to go quite so quietly:

“We tried to help them [South Africa] too much — we left too much grass on‚ then the heat wave came and the grass died and the wicket was too slow.”

The Pakistan series will start in Centurion on December 26‚ and like his colleague down the N1 — and unlike last season — Faul said he hadn’t heard from the South African camp.

“They want a good wicket with good pace and bounce‚” Faul said‚ echoing the standard instruction that used to be issued before last summer’s twist.

The India pitch earned Brian Bloy‚ who was presiding over his first Test surface‚ a cacophony of criticism. “I’ve never seen someone singled out like that and I think that led to the Wanderers wicket‚” Faul said.

What of the pitch Bloy is preparing for Centurion’s first Boxing Day Test?

“Brian’s confident it will have much more pace and bounce‚” Faul said.

“The colour looks better but I’ve got a nervous groundsman.

“We’re all nervous. We do well on the field with the Titans and in areas like administration‚ but until that first ball is bowled you just don’t know.”

You don’t. But you should know better than to tell people how to do their jobs.

Proteas captain Faf du Plessis is among a group of South African Test players who will turn out for their respective franchises in this week’s ...
Sport
3 years ago
Next Article