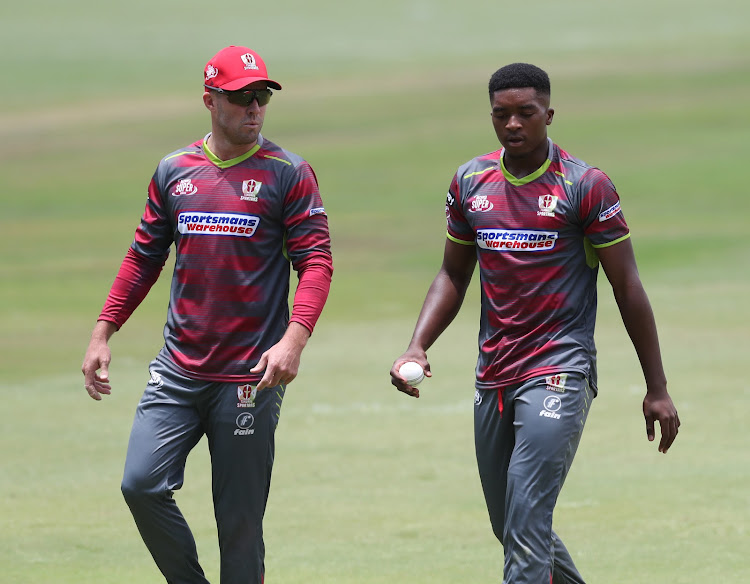 If all goes well‚ the name Lutho Sipamla will be synonymous with South African cricket for many years to come.

The 20-year old Eastern Province fast bowler was plucked out of relative obscurity to take the centre stage of the Mzansi Super League (MSL) with the Tshwane Spartans and he impressed many people‚ including the celebrated former Proteas captain AB de Villiers.

“I am very impressed with him‚ I think he has all the credentials to become a serious fast bowler for South Africa in the future‚” said De Villiers.

As he enthused about him‚ De Villiers also urged the public not to put too much pressure on the highly talented youngster from Port Elizabeth because he still has a long way to go in his development.

“We must not put unnecessary pressure on him. He is a fantastic kid‚ he has right head on his shoulders and he needs to be given proper guidance and support to learn and improve over the next few years. I am looking forward to watch him grow‚” De Villiers said.

Despite Spartans struggling in the tournament and finishing second-from-bottom‚ Sipamla took an impressive 16 wickets in the 10 matches he played with best figures of 3/19.

Speaking during the tournament‚ Sipamla said he had used the MSL to learn.

“When I was selected‚ I saw this as an opportunity for young players to do well and learn from great players such as AB and others‚” he said.

“Everything happened so quickly for me because I was not expecting to be playing in this tournament. Coming out here and putting in the performances can only be good for my career and it has been a great experience.”

Now that he has captured the imagination of the public‚ possible call-ups to South Africa A and even the Proteas may not be far-fetched‚ but Sipamla is not in a rush to represent his country.

Growing up‚ Sipamla said he always liked bowling fast to emulate some of his heroes like Makhaya Ntini‚ who played over 100 Tests for the Proteas.

“I am born and bred in Port Elizabeth and went to Grey High School. My heroes growing up include Dale Steyn‚ Makhaya Ntini‚ Nfuneko Ngam‚ Michael Holding and Brett Lee‚” he said.

A senior University of Johannesburg cricket club manager could find himself in hot water with the law after a charge of assault was laid against him ...
Sport
3 years ago

The Tshwane Spartans spectacularly failed to impress in the inaugural Mzansi Super League (MSL) because they could not build momentum‚ according to ...
Sport
3 years ago

First Graeme Smith climbs in to criticise Faf du Plessis’s captaincy‚ then Shaun Pollock has a go.
Sport
3 years ago
Next Article