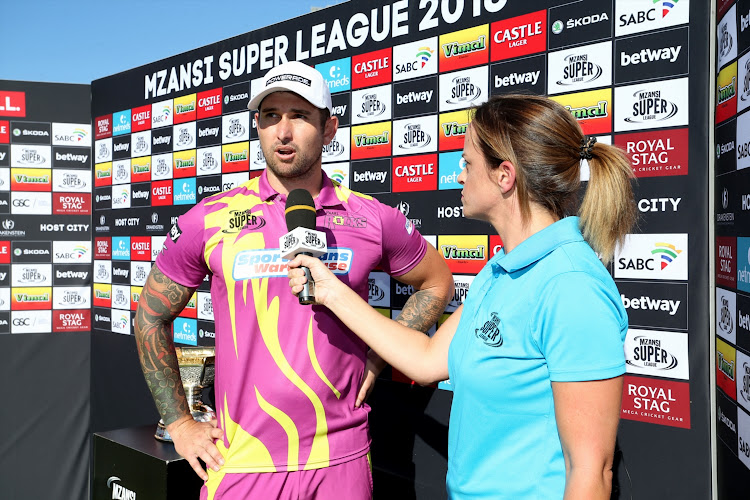 Man of the Match Cameron Delport of the Paarl Rocks during the Mzansi Super League match between Paarl Rocks and Nelson Mandela Bay Giants at Eurolux Boland Park on December 12, 2018 in Paarl.
Image: Shaun Roy

Cameron Delport carried the Paarl Rocks on his broad shoulders and wide bat into the Mzansi Super League eliminator against the Jozi Stars on Friday.

His ballistic 45-ball 84 helped the Rocks overhaul the Nelson Mandela Bay Giants' paltry 129/8 within the 16 overs required for the bonus point.

The Rocks won by six wickets with 28 balls to spare to book their ticket to the Wanderers.

The later match between the Tshwane Spartans and the Durban Heat was reduced to an academic exercise.

Delport couldn't see the business through but David Wiese clouted a six off Aaron Phangiso‚ who bowled the crucial 16th over before a wide and two runs finished the job.

Sisanda Magala nearly derailed the third-place chase when he dismissed Delport and Dwayne Bravo in three balls in the 15th over.

Delport calculated assaults on meant there was no respite for all the bowlers bar Chris Morris (1/14) and Magala (2/15).

Delport was given a life on 21 when Phangiso grassed a routine return catch in the eighth over.

That would have left the Rocks tottering at 41/3 after captain Faf du Plessis (six) had holed out to Marco Marais at deep cover off Phangiso two balls earlier.

It was the escape the clear-minded Delport required as he bashed seven fours and five sixes.

Such was the impact and magnitude of his innings‚ Henry Davids (12) and Wiese (eight*) hit a single boundary in their knocks.

Delport scored 64.61 percent of his team's runs; significant considering the Rocks were 37/1 after the power-play.

When he shifted gears‚ there wasn't a response from the visitors.

While the slow Boland Park surface had a lot to do with the Giants' low score‚ their batting left a lot to be desired.

Rudi Second‚ inexplicably pushed up to number three‚ soaked up 41 balls for his 37 while the normally explosive Marco Marais used up 28 for his 20.

Their terminal mid-innings stutter belied their reasonable start where the Giants collected 41/2 in their first six overs.

The whole innings contained only five fours and four sixes. There also was a 13.3-over spell where the Rocks dried up the boundaries.

Second and Marais batted through this barren spell as Tabraiz Shamsi (1/15)‚ Mungroo‚ Grant Thomson (0/5) and Wiese applied the squeeze with their lack of pace and intelligent bowling.

This also included a spell in the 17th over where Second failed to capitalise on Dane Paterson (1/42) bowling a wide and a no-ball.

While Ben Duckett (three) and Heino Kuhn (four) were snared in the dry spell by Shamsi and Bravo (3/22)‚ it was in the 18th over where the former West Indian international seemingly broke the back of the Giants' batting when he dismissed Second and Marais in the space of four balls.

Morris though capitalised on a wayward 19th over from Paterson where two sixes were ransacked in the 15-run over.

Morris took 12 off Bravo's last over to give the Giants a veneer of respectability. They hadn't encountered for one Delport.