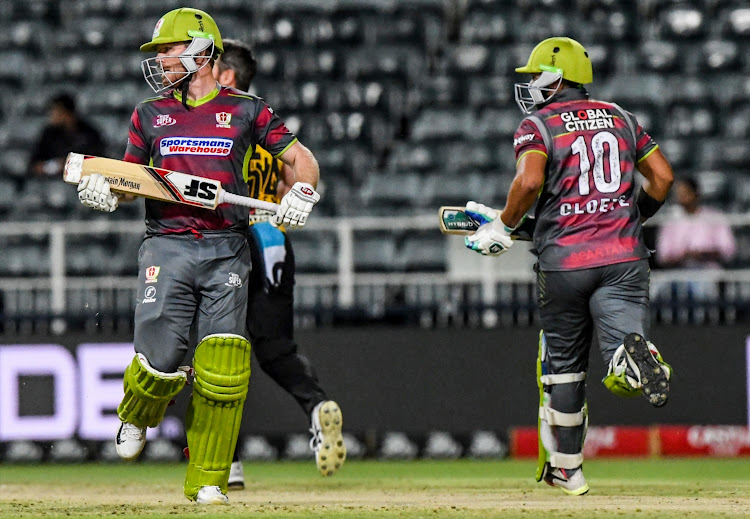 Eoin Morgan (L) and Gihahn Cloete (R) of the Tshwane Spartansrun between wickets during the Mzansi Super League match against the Jozi Stars at Bidvest Wanderers Stadium in Johannesburg on December 11, 2018.
Image: Sydney Seshibedi

Eoin Morgan believes the Tshwane Spartans can still clinch a playoff spot in their last match at home against already eliminated Durban Heat in Centurion on Wednesday.

However‚ their progress hinges on what happens in the earlier match between the Nelson Mandela Bay Giants and the Paarl Rocks in Paarl which starts at 2pm.

The Spartans were flattened by the Jozi Stars in Johannesburg on Tuesday to leave them languishing second from bottom with 16 points from nine matches.

Anything less than a bonus point win against the Heat will see them eliminated.

“Today (Tuesday) was disappointing. I thought the opposition played probably their best game of the tournament so far.

"You have to commend them for that‚” said Morgan after the Spartans were outplayed and lost by 101 runs at the Wanderers.

They play their second match in successive days when they host the Heat in a must-win match at SuperSport Park at 7pm on Wednesday.

“It’s a quick turnaround between today (Tuesday) and tomorrow (Wednesday) and we do need results to go our way as well.

"If we go out and play good cricket tomorrow (Wednesday) there’s no reason why we can’t get through (to a playoff spot).

“The motivation is to qualify to the latter stages of the tournament. I think the mood in the camp is that there is a lot of desire to want to win‚” said Morgan.

The Spartans need a bonus point win to stand any chance and they've pinned their hopes on fourth-placed Rocks (17 points from nine matches) to beat third-placed Giants (21 points after nine matches) without a bonus point in the earlier match to be played in the Boland also on Wednesday.

That would leave a three-way tie on 21 points between the Giants‚ Rocks and Spartans.

The Spartans will finish third and qualify for a playoff spot as they have won both games between themselves and the Rocks and both teams will have more wins than the Giants.

For the Giants though‚ it's a straightforward win over the Rocks that'll book them a place in the play-off match against the Jozi Stars at the Wanderers in Johannesburg on Friday.

A win for the Giants will eliminate both the Rocks and the Spartans.

If the Rocks beat the Giants with a bonus point, they go through no matter the results between the Spartans and the Heat in the later match on Wednesday.

The Jozi Stars broke all sorts of Mzansi Super League records with a swashbuckling all-round display as they shot down the Tshwane Spartans by 101 ...
Sport
2 years ago
Next Article