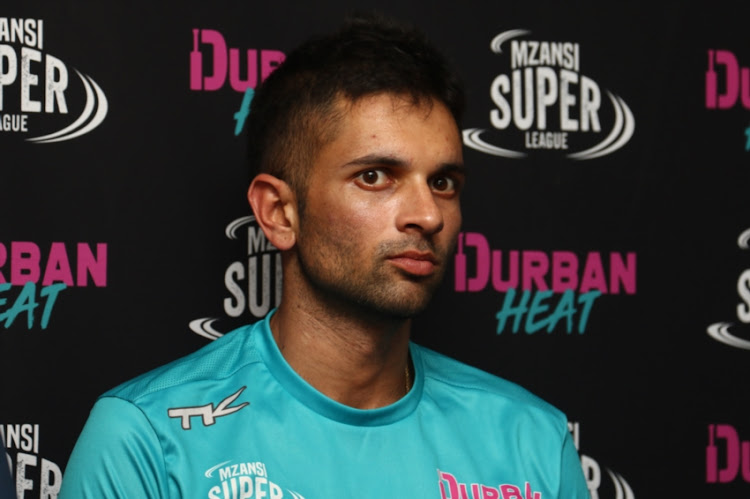 The combative left-arm spinner that is Keshav Maharaj is a key component of the Durban Heat.

The side will need to channel his competitive energy in Wednesday's Mzansi Super League clash against the Paarl Rocks at Kingsmead.

Maharaj has completed his four-over spell in all three of the Heat's games.

While his figures in the loss against the Cape Town Blitz were X-rated (1/43)‚ his guile and control have earned him a fair measure of respect in the later games against the Tshwane Spartans (3/24) and the Nelson Mandela Bay Giants (0/20).

Whether their coach Grant Morgan will employ him and Zimbabwean international Brandon Mavuta in tandem remains to be seen but spin is key for the KwaZulu-Natal side.

Kingsmead has become slow in recent years and spin has taken charge at what used to be one of South Africa's pace friendly venues.

“I don't think the mentality has changed from the way we've started the tournament‚" Maharaj said.

"We've been positive even though things haven't clicked‚ especially on the batting front. It's a good thing though because we can get all of the rustiness out of the way.

"They always talk about teams peaking at the right time and I feel we've been heading on that boat.

“We've been working very hard so it's not a question of work ethic. We've also got a good core of senior players with a bunch of youth who want to show all their talents.

"We've got enough energy and come the game‚ we're going to be a different unit but a more fully fledged and packaged one in the key departments.

"We've been exceptional in the field.”

The Heat are also sweating on Albie Morkel's fitness after the freak hand injury he suffered against the Giants on Friday.

Morkel will undergo a late fitness test but Morgan said Morkel won't be risked if he's not fit enough.

“He's really bullish about his chances and in his mind he really wants to play‚" Morgan said.

"We won't make a decision that hampers the team but we've seen with what he's given us in the last few games what he gives to the team.

“He's really up for this tournament and really wants to see this team doing well. He'll be doing everything in his power to be ready.”