By MAHLATSE MPHAHLELE at WANDERERS 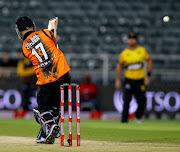 Despite a few teething batting issues, Nelson Mandela Bay Giants managed to negotiate their way to a five wickets win over the Jozi Stars in the second match of the Mzansi Super League (MSL) at Wanderers on Saturday night.

Set a modest target of 125, the Giants crossed the line inside 18 overs with Rudi Second and Ryan McLaren on unbeaten scores of 15 and 10 runs respectively as they began their campaign on a positive note.

Giants started their chase with a scare as they lost captain Jon-Jon Smuts and Marco Marias without scoring inside four overs but they were able to recover with Ben Duckett and Heino Kuhn putting together a crucial partnership of 44 off 26 balls.

The star of the Giants batting innings was Englishman and man-of-the-match Duckett who fell in the 15th over from the bowling of Leie having scored a match winning knock of 75 off 45 which included five boundaries and as many maximums.

Before they took the bat, Giants managed to restrict Stars to 124/7 due to the efforts of Smuts, who claimed three wickets, and McLaren with two to his mane while Aaron Phangiso and Junior Dala returned with one each.

The first wicket to fall for Stars was Ryan Rickelton when he was caught by Rudi Second in the third over from the bowling of Junior Dala and he was soon followed by Chris Gayle who was trapped in front by McClaren having scored 23 runs.

Before he was dismissed McClaren in the fourth over, the West Indian superstar had the Bullring crowd excited as he blasted four boundaries and one maximum.