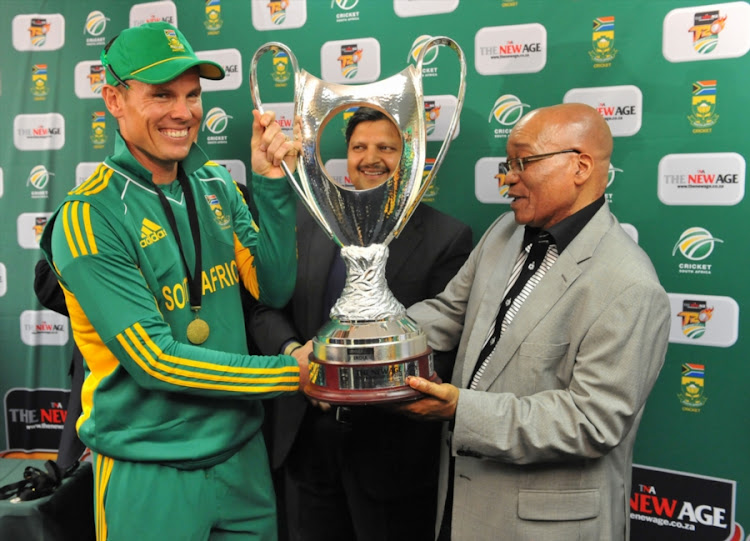 Bring your best bowlers and a thick skin‚ and don’t be fooled by Australia’s form this year.

Johan Botha’s advice to SA for their series against the Australians next month‚ and for the not so mellow yellow fellows’ opponents in the 2019 Cricket World Cup‚ is as sensible as his bowling.

“South Africa have won enough in Australia not to fear playing here anymore‚ or standing back and almost being overawed by the occasion‚” Botha said.

And he should know.

The Johannesburg-born converted medium pacer played five Tests‚ 78 one-day internationals and 40 T20s for SA as an off-spinner before moving some 10,000 kilometres away to Adelaide in 2012 and becoming an Australian citizen in 2016.

Now 36 and still turning an arm over for the Hobart Hurricanes‚ among others‚ he captained SA’s one-day side 10 times — five of them when Graeme Smith was injured in Australia in January 2009‚ which remains their only success in bilateral series in the format there.

SA‚ no doubt still bathing in the afterglow of claiming their first Test rubber in Australia on that tour‚ prevailed 4-1 with Botha claiming eight wickets at an average of 23.50 and an economy rate of 4.00.

Of all the bowlers in action only Makhaya Ntini and Dale Steyn took as many wickets‚ and no-one could match Botha’s miserliness.

Botha added to SA’s cause with flinty lower order batting.

He wasn’t dismissed in his three innings and twice hit the winning runs — once‚ in Sydney‚ by spearing express bowler Shaun Tait through the covers for four‚ one knee on the pitch and all.

But the memory that will stay with some South Africans from the series is of Botha‚ having had to scramble and then dive to make his ground‚ shaking with nervous laughter as he lay flat on the pitch‚ arms outstretched towards the crease.

It was that kind of series. SA won by three wickets twice‚ one of those times with only three balls remaining‚ and Australia’s win was by five runs.

The three ODIs and T20 the teams will contest in November promise to be nothing like as competitive as all that. Australia are enduring their worst ever year in one-day cricket‚ losing nine of their 10 games‚ all against England.

But Botha wasn’t ready to write them off: “I think it’s just one of those things where you get in a bit of a slump‚ and a very good one-day team has just got the upper hand over them.”

He expected the Aussies to have sorted themselves out by the time the World Cup looms in England in June.

“Australia will always back themselves going into any tournament. That might just be a bit of a bluff in 2019‚ but you still have to respect the defending champions coming into the tournament.

“And if all their bowlers are fit they will definitely still be a force to look out for.”

SA‚ too‚ haven’t been their usual out-of-tournament bulletproof selves in 2018 with just seven wins from 14 ODIs. Not that Botha was about to kick them into touch‚ either.

“I think South Africa are shaping up pretty well. Again‚ if all the bowlers are fit they will compete well.

“But‚ and it’s the same for Australia‚ they will need to make big scores — especially against England and India.”

The World Cup might well turn into a captaincy contest‚ what with big beasts like Virat Kohli and SA’s own Faf du Plessis on the roam.

“Faf has been a good captain‚ although obviously it was a little bit forced on him once AB [de Villiers] didn’t want to do it anymore‚” Botha said of his predecessor at the helm.

“Probably at this stage no-one else is ready to take over just yet. Aiden Markram is probably next but not yet‚ maybe after the World Cup.”

But‚ right here‚ right now‚ Du Plessis should prepare himself for reminders of his conviction for ball-tampering in Australia two years ago.

“The Australian public will hang onto anything to try make your tour a disaster‚ especially [if it involves] the captain of the opposing team.

“The same thing will happen with Virat Kohli later this summer [when India will play three matches each in each format in Australia].”

Presumably‚ that the Aussies are still reeling from their own ball-tampering scandal will be forgotten.

But only if they win. Should they lose‚ again‚ they will need far thicker skins than their opponents.

If ever there was a time to take on Australia in a one-day series‚ that time is now.
Sport
2 years ago

Former Proteas captain AB de Villiers is backing Reeza Hendricks to bat at No 3 at the World Cup in England next year.
Sport
2 years ago
Next Article