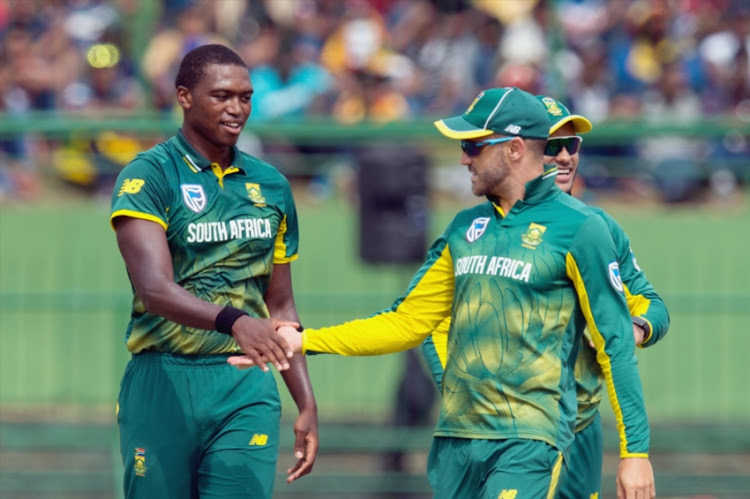 Lungi Ngidi of South Africa celebrates the wicket of Upul Tharanga of Sri Lanka (not in picture) along with Captain Faf du Plessis during the 3rd ODI between Sri Lanka and South Africa at Pallekele International Cricket Stadium on August 05, 2018 in Pallekele, Sri Lanka.
Image: Sameera Peiris/Gallo Images

It’s part of the strangeness of sport that those who might be able to explain what went wrong — or not entirely right — rarely turn up at press conferences.

So it was that Lungi Ngidi and Heinrich Klaasen were trotted out in the wake of South Africa’s unconvincing display in the first one-day international against Zimbabwe in Kimberley on Sunday.

Ngidi took 3/19 in 8.1 overs‚ the sharp edge of the axe that condemned Zimbabwe to a miserable total of 117 — their lowest in ODIs against South Africa.

What’s to explain? How a batting line-up far superior to Zimbabwe’s bowlers managed to lose five wickets in pursuit of so small a target.

Maybe Aiden Markram should have been made available to talk about his thinking when‚ having been dropped four overs earlier‚ he was caught behind off a no-ball and heaved a catch to mid-off in the same over.

Or Dean Elgar might have turned up to discuss playing his first ODI in almost three years‚ and about steering a leading edge to third man after scoring two off 10.

Or JP Duminy to unpack why he chose to field first in conditions that would have challenged his batsmen to come through 50 overs of application and discipline.

Or Dale Steyn to tell us how he felt about being left out despite those conditions‚ and how he might find his way back into an attack that took their chance to fire on all cylinders.

Instead we had Ngidi — top score in ODIs six‚ average 11.00 — offering batting advice.

“The wicket was difficult‚” he said.

“But we saw how {Heinrich] Klaasen batted — if it’s a good ball then you let it go and you put away the bad one.

“Driving was difficult‚ depending on the length. If you pitched it too full it was really easy to hit. But if you hit that good length it was really difficult to drive.”

Klaasen‚ too‚ confined much of his input to the pitch: “There was up and down movement and there was a little ridge on the one side that made it very difficult to play cover drives.

“It was tennis ball bounce and it stopped on you. You needed more of a four-day mindset.”

But he also offered a glimpse the mind of one of South Africa’s most watchable players.

“Every game I play I need to do well‚” he said.

“If I get three opportunities and I fail three times‚ that’s my chance gone.

“It adds pressure on me but I enjoy it.”

What South Africa’s chase might have amounted to were it not for Klaasen is a chilling thought.

Kimberley’s pitch is normally among the flattest in the game‚ as is the surface in Bloemfontein‚ where the second game of the series will be played on Wednesday.

And if Kimberley can deliver something more testing than the norm‚ so can Bloem.

Indeed‚ South Africa’s batsmen should hope that’s exactly what happens so they have the opportunity to redeem themselves.

They won’t want for motivation to do better‚ but here it is anyway: anything less than a 3-0 thumping of opponents who deserve nothing more nor less will result in South Africa dropping down the rankings.

Put that in your bat to keep it straight.