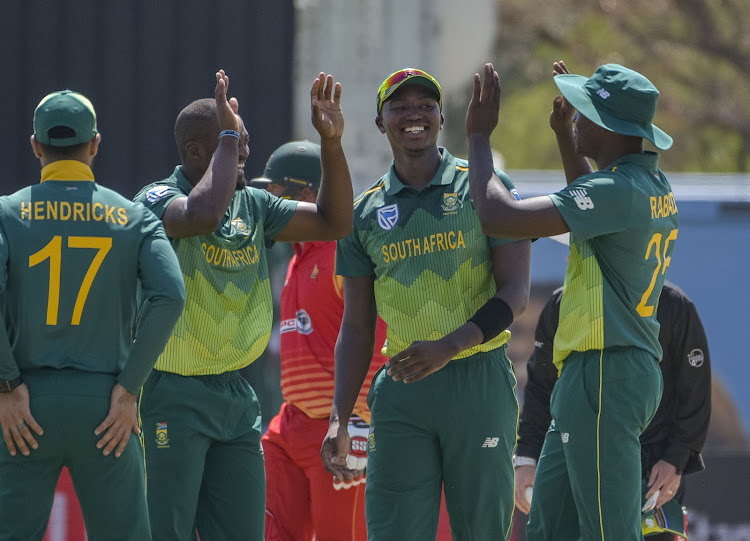 South Africa celebrating during the first Momentum ODI match between South Africa and Zimbabwe at Diamond Oval in Kimberley on 30 September 2018.
Image: ©BackpagePix

That South Africa would win the first one-day international in Kimberley on Sunday was as close to guaranteed as sport gets.

Win they duly did‚ though nowhere near as convincingly as they should have — by five wickets with a ball short of 24 overs remaining.

Having bowled and fielded as if they were determined to ignore the fact that their opponents were a poor excuse for a team‚ they batted as if nothing could possibly derail their victory.

They were proved correct‚ though they would surely not take that attitude into a proper contest.

How bad things could get for the Zimbabweans was less certain than South Africa’s all but assured success. So‚ how bad did things get?

Bad enough for the visitors to be in danger of being dismissed in the first half of their innings: they were six down inside 22 overs.

Bad enough for them to be dispatched for 117‚ their lowest total in the 39 ODIs they have played against South Africa.

Bad enough for South Africa’s reply to start 50 before the scheduled lunch interval‚ which they reached needing 73 more runs off 38 overs.

For all that‚ there were something like mitigating factors to consider.

The pitch‚ normally as flat as the 165 kilometres of N8 that connects Kimberley to Bloemfontein‚ was as fresh as the breezy spring morning.

That was almost unfair on a team who had played their previous 26 games on the slow surfaces of home‚ Bangladesh and the United Arab Emirates.

And 117 isn’t as bad as it gets for a side who have been bowled out for 23 lower scores‚ 16 of them in double figures and three of them fewer than 50.

Six Zimbabweans didn’t escape the single figures and only Hamilton Masakadza and Elton Chigumbura got into the 20s.

That‚ mind‚ against a South Africa attack that‚ despite the conditions and JP Duminy choosing to field first‚ did not include Dale Steyn.

Lungi Ngidi was menacing as a nice kid can be for his 3/19‚ and Kagiso Rabada‚ Andile Phehlukwayo and Imran Tahir took two wickets each.

Tahir rasped with enough aggressive intent in his first game for South Africa since February to claim a few more. The Zimbabweans’ batting was a litany of poor strokes and‚ for variation‚ a couple of oddities.

Craig Ervine was given out caught behind off Wiaan Mulder. All good‚ except that Ervine hadn’t hit the ball.

Kyle Jarvis couldn’t blame the umpire — he elbowed a delivery from Ngidi onto his stumps.

The match‚ then‚ was won and lost in the 34.1 overs the Zimbabweans managed to stay alive at the crease.

But that doesn’t excuse the lack of discipline South Africa’s batsmen showed.

Aiden Markram slashed a drive off Tendai Chatara and was dropped by wicketkeeper Brendan Taylor‚ then managed in the space of another over from the same bowler to cut a no-ball to slip and slap an easy catch to mid-off.

Still‚ Markram’s 27 represented more than a fifth of the target and was bettered only by Heinrich Klaasen showing he had lost none of his gumption and go-forward last season for his run-a-ball 44.

Christiaan Jonker’s first innings in a South Africa shirt lasted 14 balls‚ the last of which he heaved to midwicket to earn a maiden wicket for another debutant‚ leg spinner Brandon Mavuta.

Bits and bobs made up the rest‚ most notably Duminy’s 16 and Mulder’s 14; both unbeaten.

But South Africa will know that’s not all that will matter when the series resumes down the road in Bloem on Wednesday.