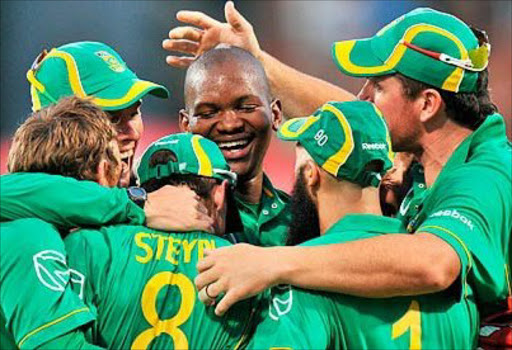 The Proteas will face Zimbabwe in Kimberly
Image: File photo

Zimbabwe have played South Africa in 50 matches of all shapes and sizes. And they’ve won? Two.

There’s also a draw and a no-result in all that‚ but the padded up elephant in the Zimbos’ dressing room is that South Africa have piled up 46 victories against them.

That trend is unlikely to be bucked at the Diamond Oval in Kimberley on Sunday‚ when the teams meet in the first of three one-day internationals.

South Africa are without Faf du Plessis and Hashim Amla because of shoulder and finger injuries‚ and will take their first step into a future that does not include the retired AB de Villiers and Morné Morkel.

But it’s difficult to imagine them losing to the chronically understaffed‚ underfunded‚ underwhelming‚ under-everything Zimbabweans — who have been beaten in 20 of the 26 games they have played this year‚ including by the likes of Afghanistan‚ six times‚ nogal‚ and the United Arab Emirates.

They’ve won against the Afghans‚ twice‚ Ireland‚ Hong Kong and Sri Lanka. And tied with Scotland.

There is‚ then‚ no dressing up Sunday’s game as a proper contest. From South Africa’s perspective‚ it promises at best to be a middle practice with the emphasis on making progress towards finalising the squad they will take to the World Cup in England next year.

Reeza Hendricks may or may not make that trip. Certainly‚ he did his chances no harm by scoring 102 on his ODI debut against Sri Lanka in Pallekele last month.

But efforts of two‚ nought and 19 in his other innings in that series means he has work to do to keep himself uppermost in the selectors’ thoughts.

Although he now plays for the Lions‚ Hendricks has been taking guard in Kimberley‚ his hometown‚ all his life: he scored 95 there on his first-class debut against Namibia almost a dozen years ago.

“It’s going to be a special moment‚ walking out in the green and gold in front of my friends and family‚” Hendricks told reporters in Kimberley on Friday.

What kind of conditions did he hope to encounter?

“It’s normally a good one-day wicket and I’m expecting the same again: batter-friendly I would think.”

Flat as a runover rat‚ Hendricks might have said. That’s generally the state of Kimberley’s pitch‚ particularly for white-ball games‚ and the short straight boundaries only add to the bowlers’ challenge.

How Christiaan Jonker fares‚ should he make his debut‚ having replaced David Miller is another point of focus.

Imran Tahir missed the tour to Sri Lanka‚ so his form will be assessed.

But Hendricks‚ the only Kimberley kid in the squad and the fourth to play an ODI in the dusty diamond town — the others were Daryll Cullinan‚ Boeta Dippenaar and Ryan McLaren — will steal everyone’s thunder‚ especially if he comes good.

Some in the crowd might have first-hand memories of his first-class debut‚ but only the staunchly dedicated among them are likely to connect the dots between Hendricks’s dismissal in that match and Sunday’s game.

He was caught behind off medium pacer Burton van Rooi. And the wicketkeeper?

Tatenda Taibu‚ who had fled to Namibia in fear of his life — he said — after saying the wrong thing out loud too many times in his native Zimbabwe.

If that’s how they treat one of their finest players‚ can we wonder why they can’t play cricket for toffee?