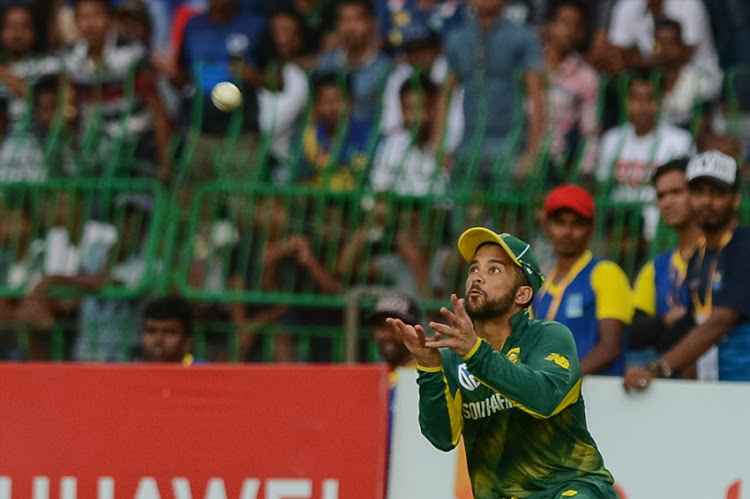 JP Duminy South African cricketer gets under the ball for a catch during the 5th ODI between Sri Lanka and South Africa at R. Premadasa Stadium on August 12, 2018 in Colombo, Sri Lanka.
Image: Sameera Peiris/Gallo Images

Faf du Plessis and Hashim Amla have been spared the charade of pretending Zimbabwe will offer tough resistance when the visitors face SA in the one-day series that starts in Kimberley on Sunday.

But JP Duminy has drawn the short straw: as South Africa’s stand-in captain in Du Plessis’ absence he will have to take it all seriously.

As will Dean Elgar has been rustled from the rest he earned by helping Surrey win the county championship to replace Amla.

Oh to have been a fly on the famously grumpy batsman’s wall when he took that call.

A Cricket South Africa release on Tuesday quoted team manager Mohamed Moosajee as saying the medical committee had decided Du Plessis has “not made a satisfactory recovery from his shoulder injury [picked up in Sri Lanka last month] and has been given more time to make a complete recovery”.

Duminy has led South Africa in nine T20s‚ of which his team have won four.

The Zimbabweans‚ who have celebrated victory in only five of the 26 games they have played this year and crashed out of next year’s World Cup by losing to Afghanistan — yes‚ Afghanistan — should help Duminy improve his winning percentage.

Amla had “sustained a tear to the tendon in his left [pinkie finger] while fielding during the recently concluded Caribbean Premier League” and would need up to three weeks to regain fitness.

So into the mix comes Elgar‚ who is unlikely to be assuaged by the nice things selection convenor Linda Zondi was quoted as saying about him: “We have said that the Zimbabwe series is an opportunity to further explore our ODI options and the unfortunate injury to Hashim gives us an opportunity to see what Dean is capable of in the limited overs format.

“He has always been on our radar having put in consistent performances both in South Africa and the UK‚ and brings a wealth of valuable experience to the batting group in Hashim and Faf’s absence.”

Elgar has earned every bit of his reputation as one of Test cricket’s hardest bastards‚ but in more than six years as an international he has played just six ODIs — the last of them against India in Mumbai almost three years ago.

That said‚ he has made plain his ambition to be part of South Africa’s effort to win the World Cup‚ so perhaps he won’t be quite so bleak about the white-ball batting practice he will be given by Zimbabwe’s bowlers.

Keshav Maharaj has been released from South Africa’s squad to play for the Dolphins in their four-day match against the Titans in Centurion on Wednesday.

Whoever. Whatever. South Africa should have the beating of Zimbabwe regardless of the XI they name.