You snooze you Luus as SA eye series win 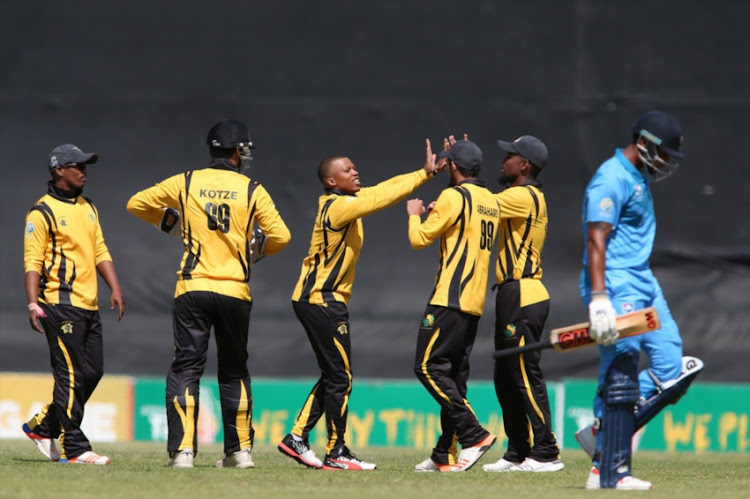 Nkululeko Serame of Boland is congratulated for getting Patrick Kruger of Northern Cape wicket during the 2018 Africa T20 Cup match between Boland and Northern Cape at Eurolux Boland Park on September 16, 2018 in Paarl, South Africa.
Image: Shaun Roy/Gallo Images

Take away a team’s most fiery bowler and their trusted wicketkeeper‚ who are also two of their most experienced players‚ and send them on tour with four uncapped players in the squad‚ and see how they do.

If that team are South Africa‚ just fine‚ thank you.

At least‚ they were at Kensington Oval in Barbados on Sunday — when South Africa beat West Indies by 40 runs in the first match of their Women’s Championship ODI series.

And that with Shabnim Ismail at home to be with her ill father and Trisha Chetty out with a back injury.

Ismail has had 156 matches for South Africa and Chetty 175. Only Mignon du Preez has played more ODIs for the side than Chetty‚ and only Du Preez has more T20 caps than Ismail.

Luus‚ who also made a half-century in a warm-up match‚ last reached 50 in an ODI 11 innings and more than two years ago. Where has her form been?

“I’ve been doubting what I’ve been doing for a while now‚ but I worked really hard to get through that‚” Luus said in Bridgetown. “It’s good to see the rewards.”

You snooze you Luus‚ we might say. But she had hostile bowling as a wake-up call: “They literally went for our heads.”

The second match is at the same venue on Wednesday‚ and should South Africa win they will claim the rubber.

“The first win is always important — the momentum is on our side now‚” Luus said. “We just need to convert it in the second and third game.”

Victory on Wednesday would move South Africa up to sixth place in the Women’s Championship standings.

They have won just three of their seven games in the competition and are currently seventh out of the eight competing teams with two games in hand.

The top three teams‚ along with hosts New Zealand‚ will crack the nod for the 2021 World Cup leaving the rest to fight it out in a 10-team qualifier for the remaining four places.