Winning wasn't everything for SA in Sri Lanka‚ Gibson says 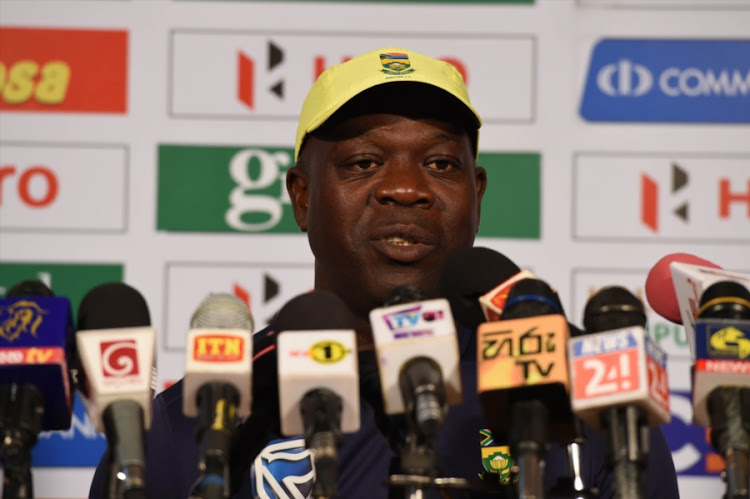 But‚ as Ottis Gibson explained after the last match of SA’s tour to Sri Lanka‚ winning wasn’t everything.

“If it was all about winning we would have brought [Imran] Tahir [who was rested] and all the other guys‚” Gibson told reporters in Colombo.

“But winning a series in Sri Lanka right now doesn’t give us a strong indicator about where we are going towards the World Cup.”

The tournament will be played from May 30 to July 14 in England‚ where conditions won’t be anything like those in the sub-continent.

So South Africa’s mission in Sri Lanka amounted to an audit of their skills base.

“This exercise in giving young players opportunities to see where they are gives us a better chance when it comes to sitting down and picking a team.

“By the time we get to Pakistan in South Africa [in December and January] we’ll be picking the team that is very close to the team that will go and help us win the World Cup.”

Gibson spoke after South Africa had been dismissed for 98 — their lowest total in 104 T20s — on their way to defeat by three wickets.

That followed two losses to end a one-day series the visitors had claimed by winning the first three games‚ which came after two Tests in which they were soundly beaten.

“In the first three games of the [ODI] series we remembered that the focus for the last six‚ eight months — since I’ve been involved — has been on trying to get ready for the World Cup‚” Gibson said.

“So we sat down and spoke about the style of play that we wanted. We talked about positive intent and taking the game forward. But within that comes clear thinking.

“So [on Tuesday] I questioned our thinking more than anything else. I don’t think there was enough clear thinking in terms of guys working out for themselves what shots were relevant on the pitch.

“We talk about how we want to be positive but we still want to make good decisions. The team or the players that make the best decisions under pressure are the ones that perform the best.

“The decision-making of some of our players in terms of shot selection [on Tuesday] was questionable.”

He saw echoes of that tendency in the last two ODIs‚ with a focus on how South Africa’s batsmen handled Akila Dananjaya‚ the off-spinner who also knows his way around leg breaks and googlies.

“Akila got wickets [in the first three games] but we took a lot of runs off him because we were positive in our decision-making and we swept and we scored.

“What I don’t want is for people to go back into themselves and start to think you’ve got to defend. I want guys to look to score.

“In the last couple of games‚ where we tried to defend‚ it’s a different story.”

How much had the tour settled South Africa’s thinking about their squad for the über alles World Cup?

“We brought a very inexperienced bowling line-up. Not so much on purpose; it’s also about who’s available.

“[Chris] Morris isn’t here because he’s injured‚ and we felt that with Dale [Steyn]‚ maybe going back and playing some more county cricket [for Hampshire] would be good for him [rather than staying in Sri Lanka after the Test series].

“That gave us the opportunity to see [Tabraiz] Shamsi and [Keshav] Maharaj‚ and I think Shamsi has been brilliant on this trip.”

Left-arm wrist spinner Shamsi took four wickets in his only Test — he should have played both — and was second in the averages and economy rates in the ODIs.

Right now‚ he looks like cracking the nod for the World Cup as leg spinner Tahir’s understudy.

But Maharaj‚ who has played all but four of his matches for South Africa in a Test shirt‚ could be given more opportunities to make his case in series against Zimbabwe‚ Australia‚ Sri Lanka and Pakistan.

“We’ve looked at some guys and seen where they are‚” Gibson said.

“We still have a couple of series and also franchise cricket at home‚ and we can start to get them up to the level they need to be at.”

Cricket South Africa’s (CSA) apparent attempts to defuse the growing anger of some of their T20 franchise owners have backfired.
Sport
3 years ago