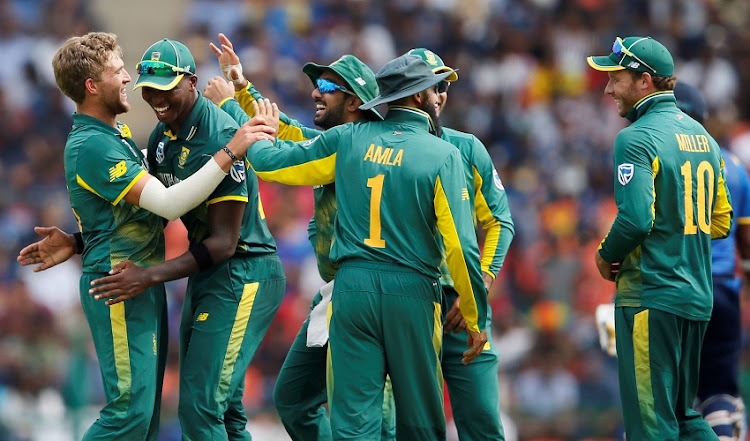 Of the many remarkable things that happened in Kandy on Sunday nothing could top that.

Not that De Kock’s elevation was anything like planned.

It happened in the 10th over of Sri Lanka’s innings after Faf du Plessis left the field having added the injury of a jarred a shoulder to the insult of dropping a difficult chance at midwicket that would have earned Wiaan Mulder the wicket of Thisara Perera.

None of the above. Team management confirmed the unthought and‚ for some‚ the unthinkable: the supposedly nonthinking De Kock was the stand-in skipper.

Maybe that view of him should be reviewed — which was what De Kock did only nine balls into his tenure when Perera fiddled down the leg side to Mulder and Nigel Llong decided the edge had not been found.

Snicko said it had and De Kock had his first strike.

In the 42nd over Dhananjaya de Silva threw his bat at a delivery from Andile Phehlukwayo‚ and Llong — not helped by a raucous crowd — again said no after De Kock took‚ low down‚ what he was convinced was a catch.

Again the captain went upstairs. And again he was proved right.

Like he had been eight balls earlier when Tabraiz Shamsi was adamant he had Suranga Lakmal leg-before and implored De Kock to involve the third umpire after Raveendra Wimalasiri turned down the appeal.

De Kock shook his head at the excited spinner — and replays showed the ball would have missed leg stump.

About the only thing captain Quinton got wrong was not to call for the catch when Lakmal skied a delivery from Lungi Ngidi‚ who also didn’t make a sound as he advanced towards where the ball was descending.

Both De Kock and Ngidi kept their eye firmly on that prize and a collision seemed certain.

Happily Ngidi is 23 centimetres taller than De Kock‚ whose gloves thudded into the fast bowler’s chest at the instant the latter took the catch.

“He ran into a brick wall there‚” Ngidi said in his television interview with Shaun Pollock‚ who had surmised that “there was only one winner” in that contest.

And with that South Africa had won the third one-day international by 78 runs to clinch the five-game series three-zip.

Six members of Sunday’s team — who scored 363/7 and dismissed the home side for 285 in 45.2 overs — were in the squad who couldn’t bat their way out of a stale samoosa in the Test series.

The difference was the pitch‚ which was nothing like the sundried dahl on which the Tests were played.

“It seemed pretty flat but you don’t want to think like that as a bowler‚” Ngidi said.

“It was pretty similar to a South African wicket.”

That‚ strange as it may seem‚ was part of Sri Lanka’s plan.

“We want to play on good wickets and try and win rather than play on dusty wickets‚” Angelo Mathews said. “We need to think out of the box if we want to win away as well.”

Aside from preparing a pitch that favoured their opponents‚ another reason the Lankans lost on Sunday was Reeza Hendricks — who scored the fastest century among all 2 453 men who have taken guard as debutants in an ODI.

Reeza reached his hundred off 88 balls of magnificent mayhem in which he drove sublimely and swept outrageously.

His 102 made him the third South African to celebrate a century in his first ODI and the only one to do so away and against a proper team.

Colin Ingram’s 124 against Zimbabwe in Bloemfontein in October 2010 and Temba Bavuma’s 113 against Ireland in Benoni in September 2016 were fine innings‚ but Hendricks’ puts theirs in the shade.

He replaced Aiden Markram‚ who scored three and nought in the first two games of the series‚ in the only change to South Africa’s XI.

Amla‚ who made 19 and 43 in the first two matches‚ and David Miller‚ who scored 10 and three‚ came good with innings of 59 and 51. Both‚ then‚ have answered questions about their form.

Duminy didn’t face that challenge having scored an unbeaten 53 in the first game. But that didn’t stop him from producing his highest score in 46 ODI innings.

His 92‚ which flew off 70 balls and was studded with eight fours and four sixes — 56 runs in boundaries — was further evidence that he has a lot left to give.

Sri Lanka were never in the hunt in their reply‚ but Ngidi bowled with pace and purpose for his 4/57.

The creative Phehlukwayo‚ a confident trickster armed and dangerous with knuckleballs‚ slow bouncers and back-of-the-handers‚ took 3/74.

“To play so freely on debut was remarkable to see‚” Du Plessis said of Hendricks’ performance.

It was. But not as remarkable as De Kock captaining South Africa.

Who’d have thunk it.