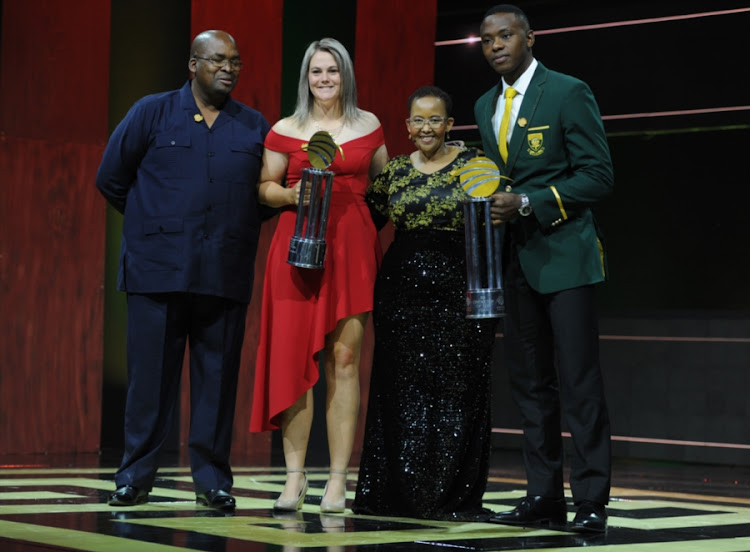 The season officially ended in a blaze of glitz and glamour at Cricket South Africa’s (CSA) awards in Johannesburg on Saturday‚ but several unresolved issues hang over the game.

That said‚ the most pressing among them‚ the lack of a permanent agreement between CSA and the South African Cricketers’ Association (SACA)‚ could be decided in the next two days and formalised in two weeks.

Kagiso Rabada walked away with much of the gilt on offer on Saturday in the shape of six awards‚ including the major prize of “SA Cricketer of the Year” — his second.

The glamour came from the striking outfits donned for the occasion‚ not least the floral suit of lilac‚ tangerine and emerald worn by Thabang Moroe‚ CSA’s acting chief executive.

Moroe put most of the other guests in the shade with his bold choice‚ which isn’t difficult considering cricket’s chronic conservatism on every front.

But others would have seen in Moroe’s stunning clothes a metaphor for the outspoken‚ unconventional administrator he has become since the abrupt end to Haroon Lorgat’s tenure in September over problems with the establishment of the Global League T20.

Moroe said on Monday his suit “symbolised the colourful season we’ve just had”‚ and colourful it has been.

Aside from Lorgat’s departure‚ the summer saw Test series victories over India and Australia‚ the latter electrified by drama on and off the field‚ and‚ on May 23‚ AB de Villiers’ retirement from international cricket.

But those issues are trapped in their own amber.

What isn’t is that South African cricket’s major employers and its employees have yet to agree a new memorandum of understanding (MOU). Currently an interim deal governs their relationship.

The good news is success seems within reach.

“Should we not be able to finish in the next two days we’ve got other days scheduled. We set a deadline of June 30‚ so we still have time. But if we can tie it up early we’ll take that opportunity.”

SACA chief executive Tony Irish said the organisation would “be in a better position to let you know progress towards the end of the month”.

There is also something like certainty over Moroe’s status.

“The board has already announced that I will continue acting as the CEO of CSA for the next couple of months until a permanent appointment has been made‚” he said.

“As things stand it looks as if I will continue acting for the next two months‚ minimum. But it could take three months.”

The bigger picture is that the shape of domestic cricket could change in two seasons’ time in accordance with a resolution taken at CSA’s transformation indaba in April to increase the number of franchises.

Moroe said that decision had been taken “precisely to give opportunity to more players”.

“Cricket continues to grow from a participation point of view‚” he said.

“Cricket is growing as far as grassroots and amateur level is concerned.

“Our pipeline has become pretty stifled at the top. It’s become somewhat of a bottleneck because all the decent and good cricketers we produce at provincial level don’t have space or opportunities to play franchise cricket because of us only having six teams.”

How many more franchises is‚ at this stage‚ unknown and how a system that is already modest financially will feed more mouths will worry many administrators.

Some of them will be quietly relieved that changes won’t be made for the 2018-19 campaign.

“Whenever you award a franchise‚ they need to prepare a budget to operationalise the team‚” Moroe said.

“They need to have marketing or commercial proposals so that they can get sponsors for their team.

“We need to have that team or those teams in our plans for scheduling. Given that we are already working on those schedules and that those people don’t have an opportunity to budget properly‚ it cannot happen this season.”

“We need to get the plans ready to announce and award this [2018-19] season so that people are ready for the coming season‚” Moroe said.

Fast bowler wins cricketer of the year for second time.
Sport
4 years ago

Proteas fast bowler Kagiso “KG” Rabada stole the show at the Cricket South Africa (CSA) awards in Sandton on Saturday night when he walked away with ...
Sport
4 years ago

SA Cricketer of the year Kagiso “KG” Rabada is targeting the outgoing series to Sri Lanka next month to make his return from the injury that ruled ...
Sport
4 years ago
Next Article