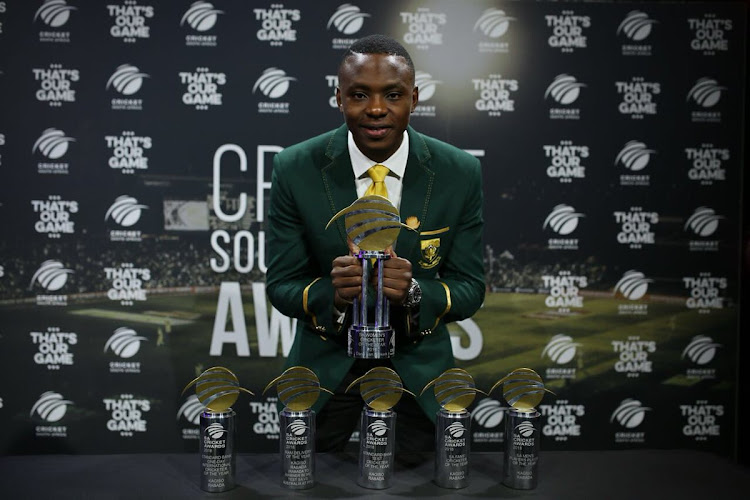 SA Cricketer of the Year Kagiso Rabada poses for photographs with his trophies.
Image: Cricket SA via Twitter

SA Cricketer of the year Kagiso “KG” Rabada is targeting the outgoing series to Sri Lanka next month to make his return from the injury that ruled him out of the Delhi Daredevils' roster in the lucrative Indian Premier League (IPL).

Rabada has been out of action with the lower back stress he suffered during the fourth and final Test match against Australia at the Wanderers Stadium in April.

He has now returned to training and wants to be ruthless in the coming season.

“There are things that happened to me‚ some were good and some bad and I have taken note of them‚” he said after walking away with six gongs that included Cricketer of the year and Players' player of the year at the Cricket SA Awards in Sandton on Saturday night.

“I have made a conscious effort to improve on the things that did not work for me on the cricket field or in my personal life.

"That’s where I am at the moment‚ I just want to try to build from last season and try to be as ruthless as possible in the new season.”

Giving an update on his injury‚ Rabada said he hoped that the plan he has followed for the past three months goes according to plan and he is on the plane to Sri Lanka for the start of the Proteas' international season.

“I have been taking it one week at a time‚" he said.

" When I got injured there was a plan for three months so that I am ready for Sri Lanka. Let us wait and see if that plan goes according to plan.

"At the moment‚ it is looking good but we have to wait for July.

"I took a break for a month which I loved because I was just relaxing and doing nothing.

"Recently I have been doing a lot of cardio and stuff on the bike because the physiotherapists said I must not run even though I felt fine‚” he said‚ adding that he doesn’t expect pitches in Sri Lanka to have lots of runs.

“I don’t think that the pitches in Sri Lanka will offer lots of runs‚ it is not bad to bowl there and the challenge is to go there and adapt.”

In addition to the Cricketer of the year and the Players’ player of the year awards‚ Rabada also walked away with the Test‚ ODI‚ RAM Delivery and Fans’ Player of the Year awards to remain the only South African cricketer to have won more than five awards.

“I am glad and grateful to have received these awards‚" he said.

"They mean I am doing something right and I am doing it for my country.

"I have to focus on what’s coming next which is Sri Lanka‚’ he concluded.

Fast bowler wins cricketer of the year for second time.
Sport
4 years ago

Proteas fast bowler Kagiso “KG” Rabada stole the show at the Cricket South Africa (CSA) awards in Sandton on Saturday night when he walked away with ...
Sport
4 years ago

Certainty is hard to find these days‚ but it’s a safe bet that Proteas fast bowler Kagiso Rabada will be the big winner at the Cricket South Africa ...
Sport
4 years ago

Proteas Test opener Dean Elgar is a little bit “sick and tired” of having to prove that he belongs at the highest level.
Sport
4 years ago
Next Article