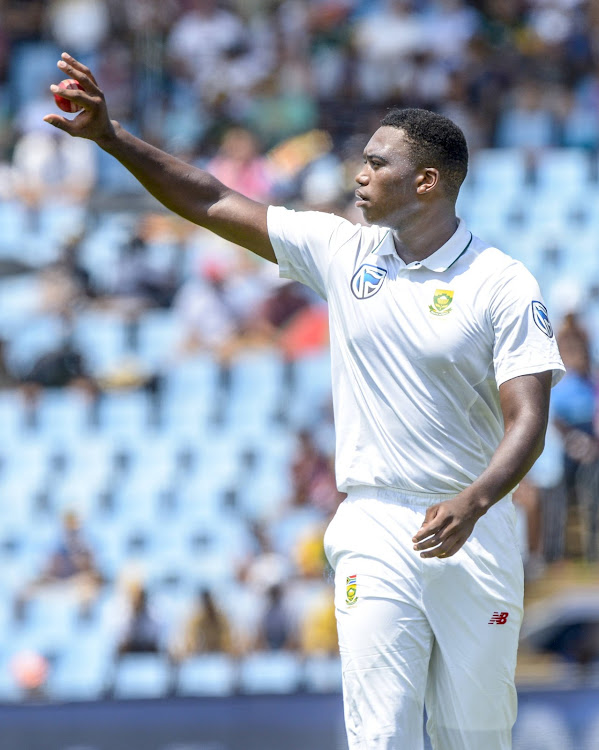 Lungi Ngidi. Morne Morkel's retirement means Ngidi now has a place in the team pending the desired make up of the team.
Image: Sydney Seshibedi/Gallo Images

Proteas fast bowler Lungisani Ngidi has gone through the full roller-coaster of emotions recently but he's primed for his next international challenge.

Ngidi had to deal with the death of his father but he has put the loss behind him with a stunning bowling performance to help the Chennai Super Kings win the Indian Premier League (IPL).

A maiden tour of Sri Lanka awaits and Ngidi has already shown the cerebral side of his bowling art.

He adapted well to the slower surfaces in India but Sri Lanka's pitches tend to behave differently.

While they have known to be reasonably batting-friendly on the first two days before rapid deterioration sets in.

Ngidi knows he'll have to call on a fair bit of the knowledge that served him and the Chennai Super Kings well in the business-end of the tournament.

“I hadn't played much in the first few games and when you get an opportunity‚ you want to prove yourself and I think I made the most of it. It was a good experience in all and I've gained a lot of confidence in my abilities. The main thing was to focus on the basics and that seemed to work for me‚” Ngidi said.

“The wickets were better than I expected so that was pleasing‚ Just being able to play in those kind of conditions from a heat and humidity perspective has put me in a better position to face Sri Lankan conditions.”

Morne Morkel's retirement means Ngidi now has a place in the team pending the desired make up of the team.

With Chris Morris struggling to recover from a back problem‚ it is not inconceivable to think South Africa will shift from what worked for them in the Australia series.

Ngidi may not be the new ball candidate should Dale Steyn and Kagiso Rabada prove their fitness ahead of the tour but shows there's enough depth.

There's also the significant matter of Vernon Philander but Ngidi is happy to be utilised in any role in which he is needed.

“KG does have a bit of a niggle but the other bowlers are looking pretty strong. They're in good form when I watched them bowl in the nets. Some of the guys look like they're in good rhythm but it's always one of those things.

“You want to take the new ball for your country. I just want to perform as best as I can for my country‚ where ever I am playing. I want to put myself in the best position to be selected‚” Ngidi said.

“It's a big responsibility but it's part of the game. It's a responsibility that I have always wanted. I can also focus on my own game and contribute to my country as best as I can.”

Certainty is hard to find these days‚ but it’s a safe bet that Proteas fast bowler Kagiso Rabada will be the big winner at the Cricket South Africa ...
Sport
4 years ago

The father of emerging Proteas fast bowler Lungi Ngidi has passed away.
Sport
4 years ago

Seam will still rule spin for SA in Sri Lanka

No spinner has topped the averages or led the wickets in any of the five Test series South Africa have played in Sri Lanka. But‚ with South Africa’s ...
Sport
4 years ago
Next Article