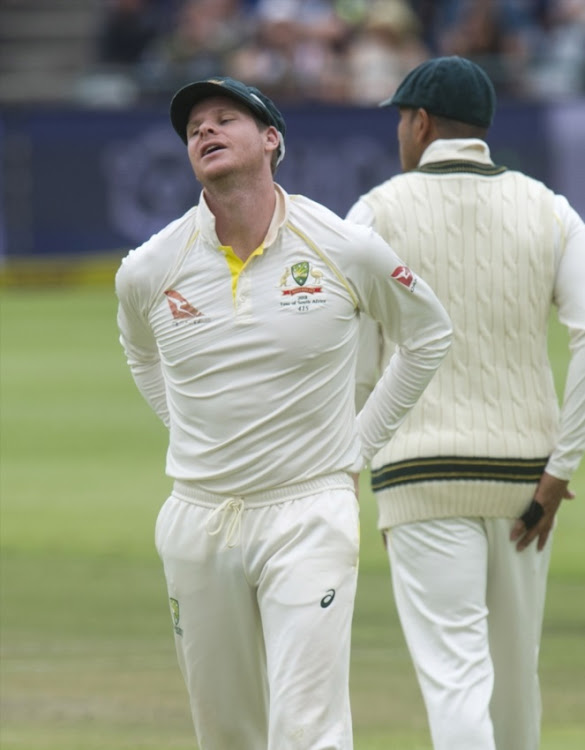 Could everybody calm down? No-one has died. No blood has been spilled. Nothing that would attract the attention of the police has occurred.

What has happened is that two Australians have admitted‚ publicly‚ to cheating in a cricket match.

Those two as well as another have been sent home‚ their honour‚ reputation‚ ego and careers between their legs.

Two have been banned from playing international and senior domestic cricket for a year by Cricket Australia (CA)‚ and the other for nine months.

One will never again be in a leadership position in Australia’s team.

The others will be ineligible for leadership for two years‚ mood permitting.

The Board of Control for Cricket in India have banned the two who have Indian Premier League contracts from playing in this year’s tournament.

Each of them owe CA 100 hours of voluntary service in community cricket.

But it’s not all bad: the three will be allowed to play club cricket.

And they will continue to be paid their retainers by CA.

In Steve Smith’s case that’s the equivalent of R17.9-million a year‚ in David Warner’s R12.6-million.

So don’t expect them to have to sell cellphone chargers at the robots to make ends meet.

Take away the wall to wall noise generated by the ball-tampering scandal‚ and that’s all there is.

In the real world this would be no big deal. But‚ of course‚ we’re not dealing with the real world; we’re dealing with a business that has sold itself to its customer base — you‚ me‚ our likeminded friends — on grand ideas of fair play and excellence.

We’re dealing with something that taps into the better memories of our childhoods and hijacks our passions in the cause of exposing us to as much marketing as possible.

The players’ role in sport is to move the ball‚ as excitingly as possible‚ from one advertising billboard to the next.

Sport is not about fair play. It’s about making money. To make money‚ it helps to win.

To win against opponents who are playing better than you‚ you need to cheat.

Crucially‚ you need to not get caught cheating.

If you are caught‚ you will face what Smith‚ Warner and Cameron Bancroft have faced since Saturday: the curdled‚ noxious anger of people who carry on as if they have exposed a partner’s affair.

In the real world‚ if this happens to you‚ you rage impotently‚ break up with the cheating bastard or bitch‚ get on with life and hope to meet someone decent.

In the world of sport‚ all there is is impotent rage.

Because you know you’re not going to be able to break up with sport.

You’re just some sad bastard or bitch who thought sport loved them as much as they still love sport. Tragic.

So these particular cheats‚ like all of their ilk‚ are the epitome of contrition not because they cheated‚ but because they got caught.

If Smith and Bancroft were sincerely sorry they wouldn’t have lied at their press conference at Newlands on Saturday.

They said they had used sticking tape loaded with sand from the pitch to roughen the ball‚ and made sure to add that that tape was standard issue equipment. CA’s release on Wednesday says sandpaper was used.

So why do you have sandpaper in your kit when bats come pre-sanded or are covered by a protective layer that cannot be sanded?

So how do you‚ as a player in the middle of a test‚ when the Australians say the plot was hatched‚ get your hands on sandpaper?

So who exactly acquired this sandpaper? Where? When?

So how long have you been doing this‚ and please tell us for real this time?

Tape is wet wipes in the cubbyhole of a married man’s car — kids are messy‚ you know.

Sandpaper is a condom‚ pristinely wrapped‚ secreted behind the sun visor of the same car.

But let’s calm down. Let’s be thankful everyone is getting out of this alive. All blood is unspilled. The police have been called‚ but only to throw a few morons out of the ground.

Three Australians are confirmed cheats — good luck telling anyone from somewhere else that there aren’t more where they came from — who have gone home to a world of shame‚ some of it deserved‚ some not.

They’re not that bad‚ are they?

Afraid they are seen to be‚ not least because the unnecessary unpleasantness Australia’s teams have visited on their opponents for decades has come home to roost. And those opponents aren’t going to let them forget it.

It’s barbaric and cruel‚ and deserved.

That’s what happens when you cheat‚ bastards.