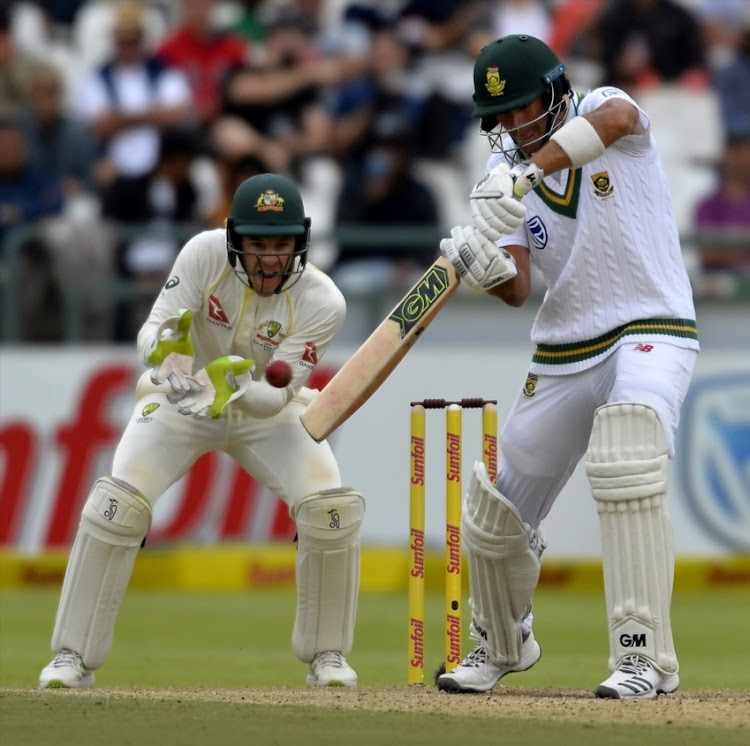 Possible evidence of ball-tampering further tainted the third test between South Africa and Australia at Newlands on Saturday.

Television footage showed Cameron Bancroft holding the ball in his left hand, rubbing the rougher of its two halves with his right, and then putting his right hand in his trouser pocket.

As the umpires summon him, perhaps to ask what’s in his pocket, Bancroft appears to take a yellow foreign object that might be sandpaper or plastic object from his righthand pocket and drop it into his underwear.

Bancroft produces a black fabric pouch of the type used to protest a pair of sunglasses.

The umpires seem satisfied with that explanation as they do not change the ball and do not dock Australia five penalty runs, the standard practice if they suspect the condition of the ball has been changed illegally.

But the on-field umpires, Nigel Llong and Richard Illingworth, might not have seen Bancroft rubbing the ball.

That information could have been conveyed to them by the television official, Ian Gould, or match referee Andy Pycroft.

The issue took the attention off the fact that, at stumps on the third day, South Africa had built their lead to 294 runs.

The home side were 238/5 in their second innings with AB de Villiers 51 not out and Quinton de Kock on 29 when bad light forced the close 13 overs early.

Australia resumed their first innings on 245/9 and added 10 runs before they were dismissed 17 balls into the day’s play when Josh Hazlewood edged Kagiso Rabada to first slip.

Rabada took 4/91 with Morne Morkel, who on Friday became the fifth bowler to take 300 test wickets for South Africa, claiming 4/87.

South Africa might have lost their first wicket without a run on the board when Markram edged the fourth ball of the innings, bowled by Mitchell Starc, to gully — where Usman Khawaja dropped the catch.

The home side slipped to 28/1 in the 10th over when Dean Elgar, who scored an undefeated 141 in the first innings, played wide of his body to Pat Cummins and steered a simple catch to second slip.

Markram and Hashim Amla added 76 before Amla was caught at cover off Pat Cummins for 31.

Markram went two balls before tea when he was easily caught at mid-on off Starc.

Faf du Plessis was trapped in for 20 an hour after tea by Nathan Lyon, and five balls later Temba Bavuma edged Hazlewood to second slip.

De Villiers and De Kock took their stand to 37 before the umpires called a halt.

A group of fans in the Railway Stand had their balloons confiscated because, ground officials said, they would have obstructed the view of other spectators.

Another spectator was reportedly removed on suspicion of stealing cell phones, and shortly before the close a group of fans were led out of the North Stand by police and security staff.

But that was the only news from beyond the boundary in a match from which 12 spectators were ejected in the first two days — one for abusing David Warner and the others for singing songs and wearing T-shirts that were deemed to be denigrating Warner’s wife.

“We are extremely disappointed that a small number of fans have directed such offensive and inappropriate behavour towards our players and members of their families," Cricket Australia chief executive James Sutherland said in a statement.

“Our chairman David Peever, who is in Cape Town, has taken the matter up directly with relevant CSA [Cricket South Africa] officials, including president Chris Nenzani.

“We acknowledge that CSA is taking steps to ensure incidents like those [on Friday] are not repeated and we have encouraged the strongest possible action in response to such behaviour.

“People who behave in such a manner should not be welcome at cricket grounds anywhere in the world, and together with the ICC [International Cricket Council] and all member countries, we strongly endorse a zero-tolerance approach to anti-social behaviour by fans.”

Ground officials confirmed that spectators who had been removed from the venue were free to return.

That differs from the approach in Australia, where fans who fall foul of accepted codes of behaviour are often banned from attending matches.