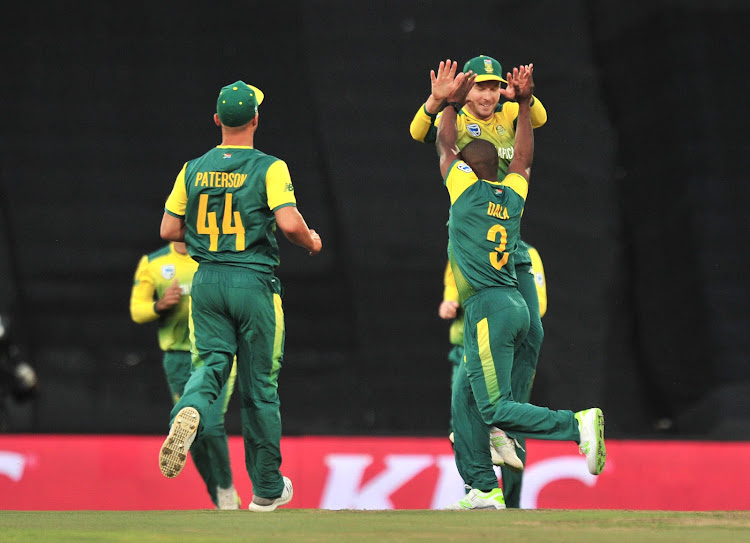 Junior Dala of South Africa celebrates with teammates the wicket of Virat Kohli of India during the 2018 2nd T20 match between South Africa and India at Supersport Park, Pretoria on 21 February 2018.
Image: Samuel Shivambu/BackpagePix

Heinrich Klaasen and JP Duminy put together a sensational partnership of 93 off 50 to help South Africa to a much needed six wickets victory over India in the second T20 in Centurion on Wednesday night.

As a result, the 3rd and final match at Newlands in Cape Town on Saturday will be the decider as this series is tantalisingly poised 1-1 after India won the opener Johannesburg on Sunday.

By the time he was caught behind by India wicket-keeper MS Dhoni in the 14th over from the bowling of Jaydev Unadkat, Klaasen had caused carnage with a breathtaking knock of 69 off 30 balls which included three maximums and a whooping seven maximums.

Proteas crossed the line with eight balls to spare with Duminy standing tall with an unbeaten knock of 64 off 40 and Farhaan Behahrdien contributed scored a useful 16 off 10.

The first wicket to fall for South Africa was Jon-Jon Smuts on two as he gifted Suresh Raina the simplest of catches at cover point after he was deceived by a slower delivery from Unadkat in the fifth over.

South Africa suffered another blow a few overs later when opener Reeza Hendricks only managed to find deep square leg from where he was caught by Hardik Pandya after he was beaten by another slower ball from Shardul Thakur having scored 26.

Struggling David Miller was the last Proteas batsman to be dismissed by Pandya having scored only five runs.

It was not a perfect performance by the Proteas but they will take positives from this match as they managed to soak up the pressure considering that the average score batting second at this venue is 130.

Some of the glaring mistakes by the Proteas were bowling at the death where they conceded 55 runs in the last four overs and Junior Dala dropping Dhoni on 35 in the penultimate over.

With the ball Dala was impressive as he got the ball rolling by trapping Rohit Sharma plumb in the second over following a maiden by Chris Morris who took the new ball.

With the fast bowlers taking a pummeling, captain and spinner Duminy introduced himself into the attack and two balls later he removed the dangerous Shikhar Dhawan for 24 when he was caught by Behardien.

It got better for South Africa when Indian batting kingpin Virat Kohli was dismissed in the following over having scored just one run after he was caught behind by Klaasen from the bowling of Dala who ended with figures of 2/28 in his four overs.

Andile Phehlukwayo struck in the eleventh over when he removed Suresh Raina, who was also trapped in front but Manish Pandey (79)  and Dhoni (52) rescued their innings with a delightful partnership of 98 off 56.

In the last 20 balls of their innings, India scored 41 runs with Dane Paterson conceding eighteen runs in the last over where Dhoni hit one maximum and two boundaries as they accelerated in the closing stages.

Beatrice Dala struggled to control her emotions after she was told that her son had done enough to convince the Cricket South Africa (CSA) selectors ...
Sport
4 years ago

The relationship between the lifeblood of professional cricket in South Africa‚ the players‚ and their paymasters‚ the administrators‚ could move ...
Sport
4 years ago
Next Article