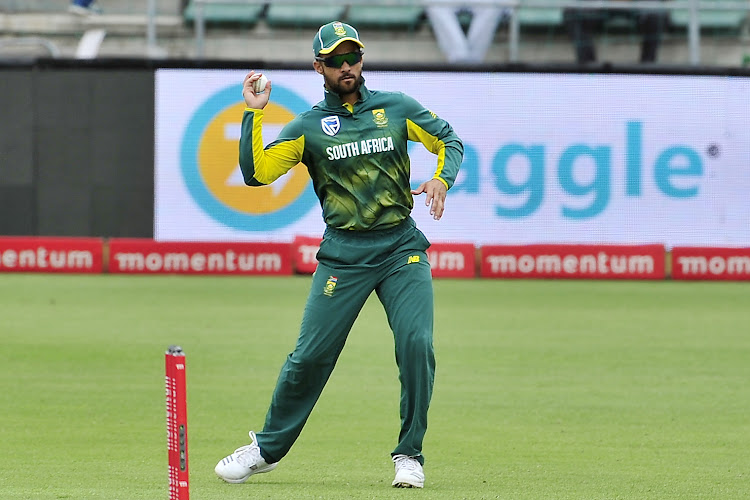 JP Duminy of the Proteas fields during the 2018 Momentum One Day International Series game between South Africa and India at St Georges Park, Port Elizabeth on 13 February 2018.
Image: Deryck Foster/BackpagePix

Proteas T20 stand-in captain JP Duminy says the best way to deal with rampant Indian skipper Virat Kohli is not to try to contain him but to take the fight to him and be aggressive.

The Proteas take on India in the first of three T20 matches at the Wanderers Stadium on Sunday afternoon where they will be confronted by Kohli and his on-form team who thrashed South Africa 5-1 in the ODI series.

“You have to approach him with an aggressive mindset‚" said Duminy.

"The plan is not only to contain him and his team but to try and get them out because wickets are going to reduce runs on the board.

"With that mindset‚ you must have plans in place and hopefully it works out.

“If you look at T20 cricket around the world‚ there is that aggressive approach whether it is against seamers or spin and that frees guys up to take the aggressive option.

"The type of spinners that India have naturally get the purchase out of the surface no matter what the grounds man produces.

"The wrist spinners generally get more turn than the finger spinners‚ so we are going to have to see how it pans out.”

These players were not part of the ODI series loss and Duminy hopes they bring freshness to the environment.

“Having new faces will help us and they will bring freshness around.

"It has been a dismal ODI series where India outplayed us.

"But that is something that we have to take on the chin and understand that we are far from a finished article going into the (2019 Cricket) World Cup next year.

"It is a good reality check for us.

"It is about each and every single player looking at themselves in the mirror and asking themselves how can they improve and stake a claim in that World Cup squad‚” he said adding that they want to win the series.

“The format is different‚ more quicker and aggressive and it will naturally bring out the best in us.

"The reason I say that is because the Pink ODI was shortened and the platform was set for almost a T20 style of play.

"That type of mindset brought the best in us.

"I am excited to see how we go about it irrespective of who we come up against.

"I still believe that with new faces and some who were in the ODI series we have a squad that can win the series.

"The aim is always to compete and win matches no matter who we come up against.”

Beatrice Dala struggled to control her emotions after she was told that her son had done enough to convince the Cricket South Africa (CSA) selectors ...
Sport
4 years ago
Next Article