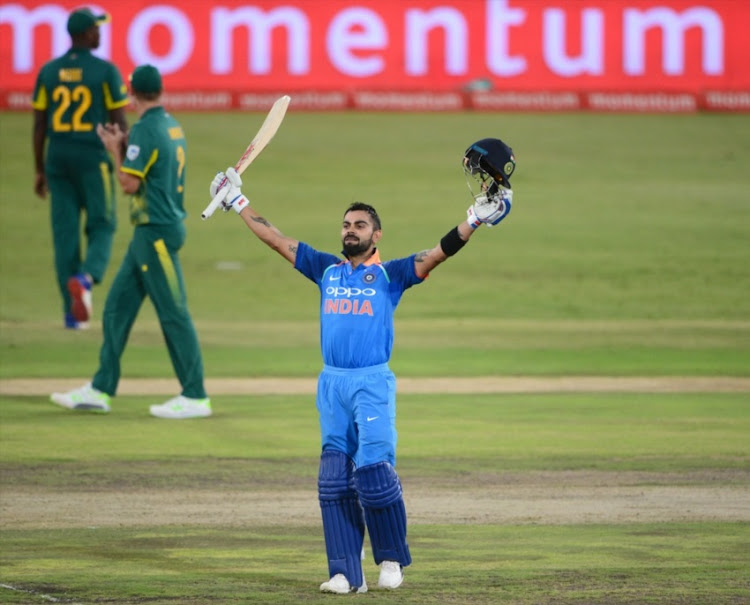 Virat Kohli of India celebrates his 100 runs during the 6th Momentum ODI match between South Africa and India at SuperSport Park on February 16, 2018 in Pretoria.
Image: Lee Warren/Gallo Images

The ICC World Cup in England is over a year away with lots of cricket still to be played and time to work on deficiencies but Ottis Gibson and his batting coach Dale Benkenstein must be seriously concerned about the current state of this Proteas ODI team.

During this embarrassing 5-1 series loss, which culminated with the eight wickets defeat that was achieved with 107 balls remaining on Friday in Centurion, South Africa were largely listless, lethargic and allowed India to wipe the floor with them.

The margins of defeats in the five losses were big and senior batsmen, with the exception of Faf du Plessis who scored a century in his only appearance, were mesmerised by the rampant Indian bowling attack that was led by wrist spinners Kuldeep Yadav and Yuzvenrda Chahal.

The South Africans were also no match to India’s peerless and inspirational captain Virat Kohli who scored three centuries in the series, including the unbeaten knock of 129 off 96 on Friday, and become the player to have scored the most runs in a bilateral series.

South Africa were deprived the services of captain Du Plessis, Quinton de Kock and AB de Villiers at different stages but it does not excuse the fact that they were unable to muster disciplines and basic applications required at this level.

In the first loss in Durban, Du Plessis, who scored the only South African century of series, sparkled with a knock of 120 and JP Duminy and Khaya Zondo top scored with 25 each in the second match.

In the following match in Cape Town, Duminy was the highest scorer with 51 while David Miller led Proteas to their only victory of the series with a knock of 39 during the rain affected Pink ODI in Johannesburg.

Then, Amla scored a gutsy 71 in the fifth match but his knock was in vain as India wrapped the series in Port Elizabeth and Zondo’s maiden century of 54 on Friday proved to be a shining light in a lost cause.

From a bowling perspective, South Africa struggled as they failed to bowl out India throughout the series with Kohli scoring three centuries of the highest order and Shikhar Dhawan helping himself to one.

In Centurion, the Proteas struggled again with the bat as they were bowled out for a modest total of 204 with nineteen balls remaining with Zondo scoring 54 off 74 balls.

The destroyer in chief for India with the ball was fast bowler Shardul Thakur who ended with impressive figures of 4/52 after he claimed the scalps of Aiden Markram (24), Amla (10), Farhaan Behardien (1) and Andile Phehlukwayo (34).

In their chase, India lost the wickets of Rohit Sharma (15) and Shikhar Dhawan (18) from the bowling of Lungi Ngidi (2/54) but they easily crossed the line with Kohli unbeaten on 129 and Anjikya Rahane on 34 and a partnership of 126 off 117.