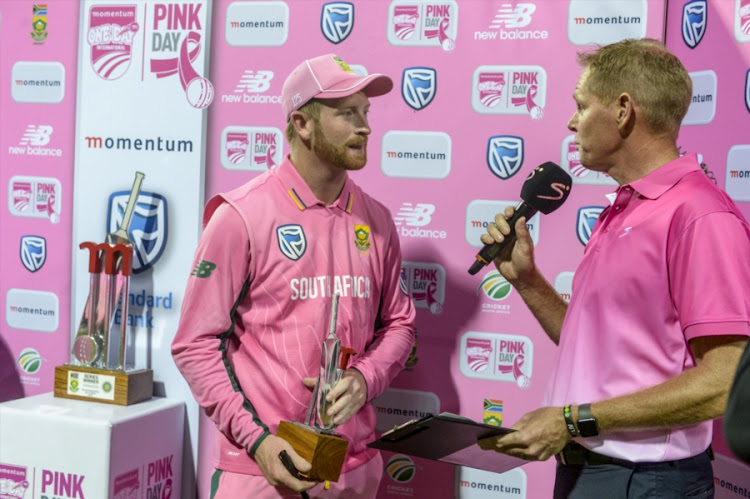 Two weeks ago Proteas wicketkeeper/batsman Heinrich Klaasen could not get tickets for the Pink ODI but as fate would have it‚ he turned out to be the hero in South Africa’s much-needed five wickets victory over India at the Bullring on Saturday.

Klaasen delivered a delightful and unbeaten knock of 43 from 27 balls‚ which included five boundaries and one maximum‚ as South Africa took the series to 3-1 with two matches in Port Elizabeth and Centurion remaining.

During his time on the field as the Proteas successfully chased down their revised target of 202‚ Klaasen shared a match-winning partnerships of 72 with David Miller (39) and an unbeaten 33 with Andile Phehlukwayo (23) as South Africa registered their first win in the series.

“It was an unbelievable experience for me and something that I have always dreamed of‚" said the Titans player with a big smile on his face while also admitting that he has never played in front of such a lively crowd before.

"I just said to Aiden Markram now that two weeks ago I told my missus that I don’t have tickets for the game and now this.

“The crowd was unbelievable.

"I have never experienced something like this before and there were some stages in the game where the crowd just went ballistic.

"I couldn’t hear any nicks or stuff like that‚ but it was an unbelievable vibe.”

The Proteas went into the Pink ODI under pressure having lost the opening three matches and Klaasen‚ who replaced injured Quinton de Kock in the side‚ said the victory is a massive confidence booster for them going into the last two matches.

“It is definitely a massive confidence booster for us and I am not saying that we did not have the confidence‚" he said.

"To have the win under our belts has lifted the spirit and the belief in the change room and it is also nice to have a guy like AB (De Villiers) back with us because the environment changes.

"He has a huge influence in the change roon and we are proud to keep the unbeaten Pink ODI record intact.”

Personally‚ Klaasen said, he was happy with the contribution and he takes confidence from the experience going forward.

“It means the world of confidence to me.

"I spoke to our spinning coach Claude Henderson and I said I just wanted to get that first knock out of the way to settle the nerves.

"Just like last season on the domestic front‚ I just wanted to get the first knock out of the way in four day cricket and settle down.

"I know I can play at this level and this performance means the world to me.

"It is better than scoring a hundred or anything like that and I am happy that I helped my country to win an important game of cricket.”

The future of Highveld Lions coach Geoffrey Toyana will be on the agenda when the Gauteng Cricket Board (GCB) meets on February 18‚ chief executive ...
Sport
4 years ago

South Africans should know “in a couple of months” whether the troubled T20 Global League (T20GL) has a future‚ Cricket South Africa (CSA) said on ...
Sport
4 years ago

A Cricket SA press release yesterday said De Villiers was out of the first three ODIs because of the finger injury he suffered while fielding in the ...
Sport
4 years ago

The Wanderers is in hot water and facing the possibility of a ban if the match officials in charge of the third Test between South Africa and India ...
Sport
4 years ago
Next Article