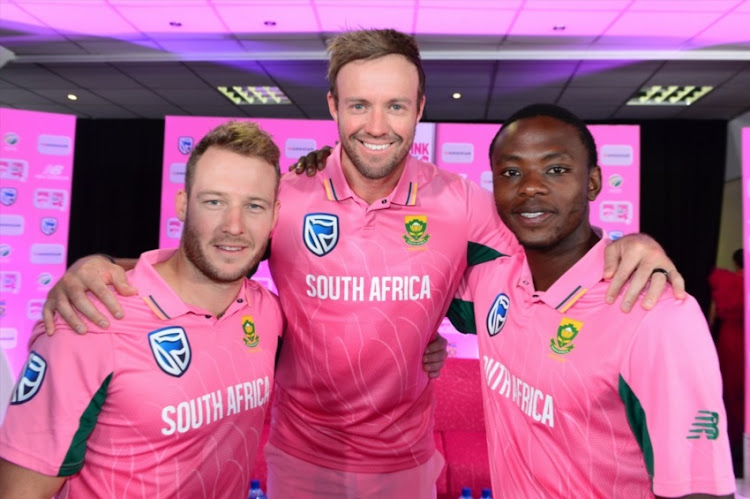 PinkDay is now so etched in our collective consciousness it has lost it’s space.

Whether it’s PinkDay or Pink Day‚ it is an occasion that is circled in red as one of the must-attend occasions on the domestic sports calendar.

Indeed‚ this year’s sell-out installment at the Wanderers on Saturday has become a red-letter affair for the wilting Proteas‚ who have to win to deny India an ODI series victory.

Already three-nil down in the six-match series‚ the Proteas‚ who are frankly in a flat spin‚ are pinning their hopes on a venue and occasion which has served them well since the inception of PinkDay in 2011.

Unbeaten in the first six editions of the event‚ the Proteas will again come dressed for success but they need more.

Fact is‚ they need to restore their master blaster AB de Villiers to full fitness.

The finger injury De Villiers sustained in the Test series kept him out of the first three ODIs and given the Proteas’ series deficit and De Villiers’ history in the event‚ there is understandable angst to get him back.

It is perhaps worth recalling that De Villiers‚ who hurt his index finger‚ illuminated PinkDay 2015 when he effectively beat the West Indies with his pinky‚ smashing 149 off 44 balls.

But enough of the nostalgic reverie‚ PinkDay at it’s very core‚ is about the future.

This year it is about the massive drive to collect money for is the Breast Cancer Clinic at the Charlotte Maxeke Johannesburg Academic Hospital.

The goal is to raise more than R1million‚ which will mostly come from the sale of bracelets designed by sunglass enthusiast David Tlale.

The Proteas‚ perhaps in need of being led by the wrist‚ will wear the bracelets during Saturday’s hostilities.

“For the bracelet‚ we selected a weave design which is in line with a lot of current trends in bold colours that will grasp the attention of anyone that sees you wearing it‚” Tlale said.

This is wise‚ given the way the first three ODIs unfolded.

“This then becomes another conversation piece around the cause and raises the funds needed to make a difference‚” Tlale continued sagely.

Naturally the Wanderers Stadium will be resplendent in pink and spectators are strongly encouraged to come decked out in the same colour in their support of breast cancer awareness.

The hastag #PitchUpInPink will be used as rallying call to get South Africans into the spirit of the occasion which in fact starts on Friday.

Proteas captain‚ Faf du Plessis‚ who will no doubt conduct the toss in a torso hugging pink shirt‚ expressed his excitement about PinkDay.

”The team has always enjoyed playing in the PinkDay and also seeing our fans really get behind the cause and campaign.

"We look forward to seeing them step it up‚” he said. A nd remember #PitchUpInPink.