Gibson earns first big scalp‚ another in the offing 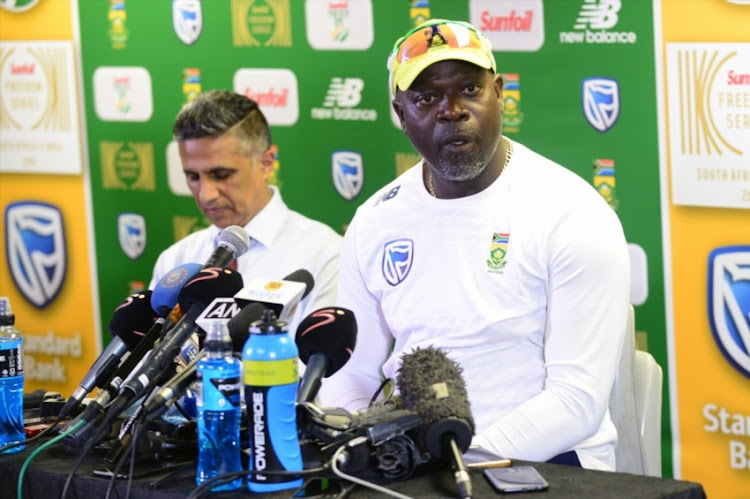 Ottis Gibson (Coach of the Proteas) during day 3 of the 3rd Sunfoil Test match between South Africa and India at Bidvest Wanderers Stadium on January 26, 2018 in Johannesburg.
Image: Lee Warren/Gallo Images

For a coach fresh from plotting the defeat of the No. 1-ranked test team Ottis Gibson spent a lot of time immediately after the series talking about what went wrong for his men.

Perhaps it was the fact that the embers of India’s 63-run win at the Wanderers on Saturday still glowed as Gibson spoke.

Or that‚ in his five tests in charge‚ he had finished on the wrong end of the equation for the first time.

But that couldn’t change the truth that Gibson had come through his first major series at South Africa’s helm with a 2-1 win.

“Having gone two-down we knew [India] were going to come back hard at us‚” Gibson said.

“A lot of credit must go to them for the way they played in this match — they were better than us and they deserved to win.”

Just like South Africa outplayed them to win by 72 runs at Newlands and by 135 runs in Centurion.

But the home side’s success was not unqualified. They scored no centuries despite their 10 half-centuries in a series in which Aiden Markram’s 94 in Centurion was the top score.

That said‚ India had only four 50s and Virat Kohli’s 153 in Centurion.

“But there were very tough batting conditions‚ even in Centurion where the wicket was dry.

“In conditions like that not everybody’s going to get a score.”

Even so‚ Gibson made the salient points that: “People got runs when the team needed runs and that’s why we won the first two games”‚ and‚ “Even when it was tough people stood up and batted us into winning positions.”

AB de Villiers’ 65 at Newlands and 80 in Centurion are cases in point‚ and even though South Africa lost at the Wanderers Dean Elgar’s 86 not out was the kind of performance that makes kids want to be professional cricketers when they grow up.

But South Africa will have to bat better than they did against India when they take on Australia in four tests in March.

They have work to do.

“We’ll have plenty of time between now and when the Australia series starts to have a look at those guys and try and see how we can get them confident again.

“Batting on this [Wanderers] wicket [on Friday]‚ if you’re not confident in your skill and your technique‚ that can play mind games with you.

“We have to take it on the chin as batsmen but it isn’t about this series now. It’s about how we start to build our confidence for the next series.”

That job won’t be helped by South Africa losing their last nine wickets for 53 runs on Saturday on a pitch that had calmed down significantly from the previous day.

“There’s a lot to take forward but the way we collapsed is something we’re going to have a look at‚” Gibson said.

For one of the most dangerous players in the game to finish the series with 71 runs from six innings at an average of 11.83 is an alarm that Gibson seems to have heard.

“Conditions were tough and he got a proper examination‚ one that he will have to sit down and reflect on‚” he said.

“But he’s a key component in our team — his keeping was outstanding.

“He and I and [batting coach] Dale Benkenstein will have to sit down and see how we can help to rebuild his confidence.”

Gibson had hope that a change of scenery would do De Kock good.

“He might come out in the one-day series [that starts at Kingsmead on Thursday] and score four hundreds. That’s his talent and ability.”

At least De Kock and South Africa’s other batsman are guaranteed better batting surfaces in the ODIs.

But will conditions go back to extreme seam and swing when the test series against the Australians starts at Kingsmead on March 1?

“Well …‚” Gibson began before melting into a laugh. “We will play Australia on good pitches.

“There are three games on the coast [after Durban‚ at St George’s Park‚ Newlands and the Wanderers]‚ and coastal wickets will probably be different to Highveld wickets.

“I don’t know whether we should be telling people what to do or what we would like‚ but we look forward to playing on good pitches.”