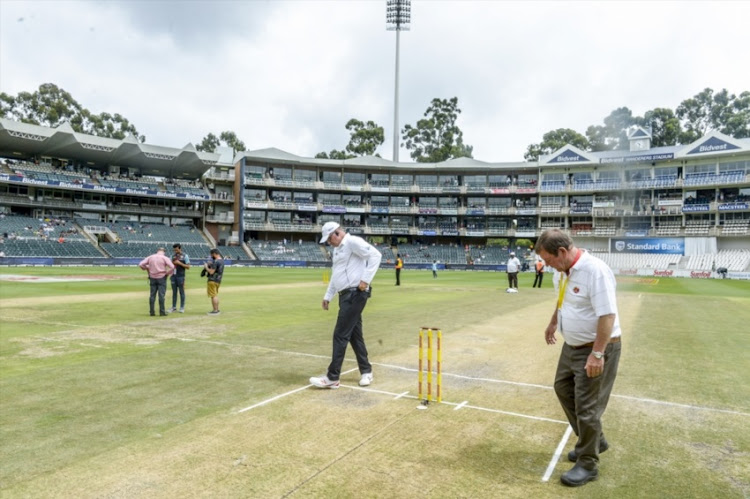 The pitch at the Wanderers during day 4 of the 3rd Sunfoil Test match between South Africa and India at Bidvest Wanderers Stadium on January 27, 2018 in Johannesburg.
Image: Sydney Seshibedi/Gallo Images

The Wanderers is in hot water and facing the possibility of a ban if the match officials in charge of the third Test between South Africa and India rate the pitch negatively to the International Cricket Council (ICC).

The pitch received severe criticism for its uneven bounce and excessive sideways movement‚ which led to stumps being called early on day three on Friday after South African opener Dean Elgar was hit on the helmet by a nasty bouncer from Jasprit Bumrah.

The ICC's new demerit points system could make life difficult for the venue.

As from January 4‚ a pitch rated as “below average” by the ICC will be given a demerit point. If it’s “poor” that becomes three demerit points.

The pitch improved slightly on the fourth day on Saturday after a heavy roller was used on the surface before the start of play and Proteas skipper Faf du Plessis that admitted he was worried when Elgar was hit on the head.

“I did not think that it was dangerous on day one and two but I started to think it was dangerous when Dean got hit on the face‚ and that’s when I got a little bit concerned about player safety‚" Du Plessis said.

"Even in the Indian innings‚ there were a few guys who got hit on the fingers a few times and if you count the amount of times guys got hit in this game its unusual.

"Excessive sideways movement is tough and dangerous and as soon as a guy is hit from length we know it may get dangerous.

"But‚ surprisingly the pitch played fine on Saturday.

"I understand that if the pitch was an absolute stinker demerit points will be a little bit more‚ so I assume that even if this pitch is rated poorly we will be able to come here for Test cricket.

"I am disappointed to see that we are not getting the pitches right and because we finished the game I don’t think that a sanction will happen.”

"Faf mentioned in his press conference that players got hit a hell lot of times‚ which is unusual for a Test match. If there was a period to call it off it was sooner rather than later.

"Unfortunately we had an incident of someone being hit on the head.

"We could have a situation (similar) to what happened in Australia.

"So there is a bit of red tape that needs to be addressed and they have to do it sooner.

"I know that people want to watch Test cricket but we are also human beings and not robots who can just take blows.” Du Plessis said he was disappointed that they did not get the pitches they wanted in the series against India. “I have said it so many times to the press throughout the series that we have never asked for something excessive‚" Du Plessis said.

"We never asked for extra grass but all we asked for from the beginning was a typical South African wicket which has pace and bounce.

"Although this wicket had pace and bounce‚ it was a lot more.

"You must always try to get an advantage over the opposition.

"When we go to India we certainly don’t play on green pitches.”