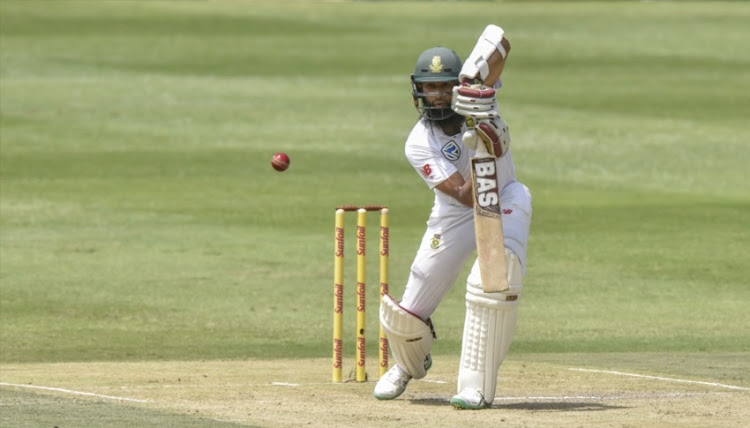 Hashim Amla of South Africa during day 2 of the 3rd Sunfoil Test match between South Africa and India at Bidvest Wanderers Stadium on January 25, 2018 in Johannesburg.
Image: Christiaan Kotze/Gallo Images

Hashim Amla survived three close reviews to score a gutsy half century as South Africa reached tea on the second day of the third and final Test against India fighting along on 143/6 at Wanderers.

When umpires called the tea break‚ Amla was unbeaten on 54 off 110 balls‚ including seven boundaries‚ with all-rounder Vernon Philander finding his feet on 13 off 22 balls after he was called into action following the demise of De Kock.

The Proteas trail India by 44 runs and the continued presence of Amla and Philander in the final session is going to be vital as the hosts will be looking to narrow the lead and possibly overtake their visitors on the scoreboard.

Their partnership is sitting on 18 off 40 balls.

Amla’s 37th half century came in the 48th over when his inside edge found its way through the gap to fine leg much to the delight of his team-mates and the appreciative small crowd from the bowling of Mohammed Shami.

Shortly after lunch restart‚ India missed out on an excellent opportunity to send AB de Villiers back to the pavilion without scoring when they did not ask for a review as the ball tracker clearly showed that he could have been trapped lbw from the bowling of Ishant Sharma.

His luck ran out a few overs later as Bhuvneshwar Kumar produced an excellent inswinger to crush De Villiers’ middle stump and the South African star batsman was on his way having contributed only five runs off 19 balls.

The fifth wicket followed later when Du Plessis left Jasprit Bumrah’s seaming ball through the gate and straight onto the top of off stump as the Indian fast bowler claimed his first scalp of the innings.

Bumrah‚ who was enjoying a good spell‚ accounted for De Kock whose inside edge was easily collected by Parthiv behind the stumps as India began to gain confidence.

In the first session‚ South Africa lost two wickets of Dean Elgar (4) and Kagiso Rabada who played a sensational knock of 30 runs off 83 balls from the respective bowling of Kumar and Sharma.