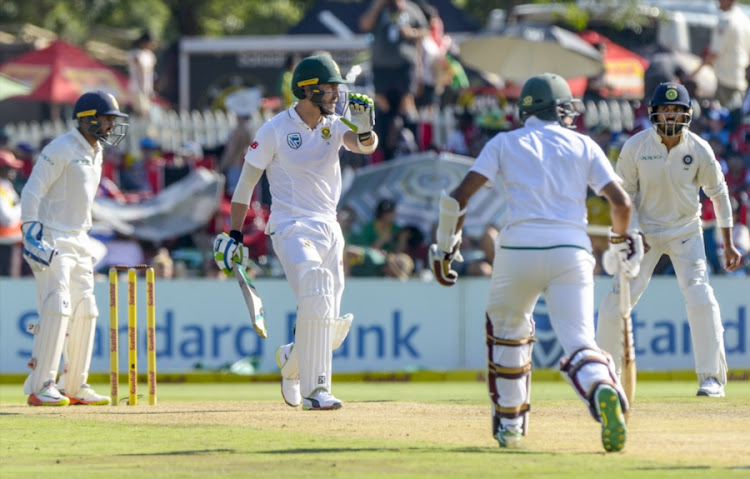 Faf du Plessis of South Africa warns teammate Hashim Amla to stay and not run in reaction to a short ball during day 1 of the 2nd Sunfoil Test match between South Africa and India at SuperSport Park on January 13, 2018 in Pretoria, South Africa.
Image: Sydney Seshibedi/Gallo Images

Proteas captain Faf du Plessis is to meet Cricket South Africa (CSA) officials to discuss the strangely slow SuperSport Park pitch that remained the focus of attention throughout the second Test against India.

SA won by 135 runs and the unhappy Proteas captain will engage CSA on the way forward.

Visiting captain Virat Kohli was happy with the pitch as it suited the Indians and provided turn at some stages.

Du Plessis‚ on the other hand‚ was not happy because they expected pace and bounce to assist fast bowlers Vernon Philander‚ Kagiso Rabada‚ Lungi Ngidi and Morne Morkel.

“I was very concerned when I got here leading up to the Test match‚" he said.

"It did not look like the Centurion pitch I know and that is a concern to be honest.

"I am very honest about good things when it is right and this was an opportunity that we missed.”

Du Plessis said it would not help to blame groundsman Byran Bloy but there must be discussions among all the stakeholders to ensure that this situation does not happen again in future.

“We can blame the groundsman but I think we must blame ourselves because we have made the process where we made sure that CSA are the ones who look after the groundsmen to get the right kind of pitches when we play against teams.

"We never wanted it to be ridiculous‚ we just wanted a pitch with pace and bounce.

"I think there is a concern that we are not getting it right.”

Last year against Bangladesh‚ Du Plessis expressed concern about the slow nature of the pitches in Potchefstroom and Bloemfontein and the trend continued in the first and second tests against India in Cape Town and Pretoria.

“I can think of three or four occasions where over the last 12 months and we needed to be better as a collective.

"That is something that I will be taking up to make sure that we improve.”

Proteas fast bowler Morkel is one of the players who made his feelings known about the SuperSport Park and he said it was like bowling in India.

“I have played here at Centurion all my life and I have never seen a wicket like this‚" Morkel said.

"It is really hard work in the heat and conditions are really tough.

"It is right up there with one of the hardest spells I have played.

"It is unheard of that a spinner can bowl so many overs on the first day.

"We even had the option of opening with a spinner before lunch.

"It really has a subcontinent feel to it‚ which is tough for scoring and tough to get people out."