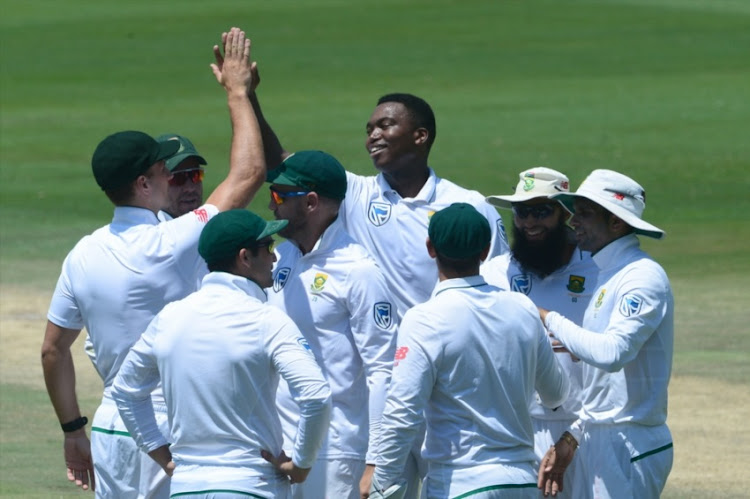 Lungi Ngidi of the Proteas celebrates the wicket of Hardik Pandya of India with his team mates during day 5 of the 2nd Sunfoil Test match between South Africa and India at SuperSport Park on January 17, 2018 in Pretoria.
Image: Lee Warren/Gallo Images

Lungi Ngidi took seven wickets as South Africa registered a 135 runs victory over India and wrapped up the Test series with a match to spare at the Wanderers in Johannesburg next week Wednesday.

Ngidi took the wickets of KL Rahul‚ Virat Kohli‚ Hardik Pandya‚ Ravichandran Ashwin‚ Mohammed Shami and Jasprit Bumrah to add to the one of Parthiv Patel in the first innings as he announced himself to the world in the best possible way.

Before lunch was called‚ India were bowled out for 151 after they were rattled by Ngidi‚ Kagiso Rabada and Morne Morkel‚ who took the seven wickets this morning to render the third and final match next week a dead rubber.

Kagiso Rabada ended the match with figures of 3/47.

The Proteas’ morning got off to a good start when the dangerous Pujara was run out by the fielding combination of AB de Villiers and Quinton de Kock on 19 runs with only three overs played.

In the process‚ Pujara became the first Indian player to be run-out twice in a Test match and the last player to suffer a similar misfortune was former New Zealand captain Stephen Fleming against Zimbabwe in Wellington in 2000.

India lost the second wicket of the morning when Morne Morkel produced a stunning aerial catch at fine leg to dismiss Patel on 19 from the bowling of Kagiso Rabada to be mobbed by his team-mates after the good effort.

Then it became a mini Ngidi show in the last hour of the session when he accounted for the wickets of Pandya and Ashwin in quick succession with De Kock showing good hands behind the stumps with both catches.

De Villiers produced a stunning catch at long leg when he dived forward to take Rohit Sharma’s top edge from the bowling of Rabada‚ who got his second wicket of the day.

Ngidi finished off the tail with the wickets of Shami and Bumrah.