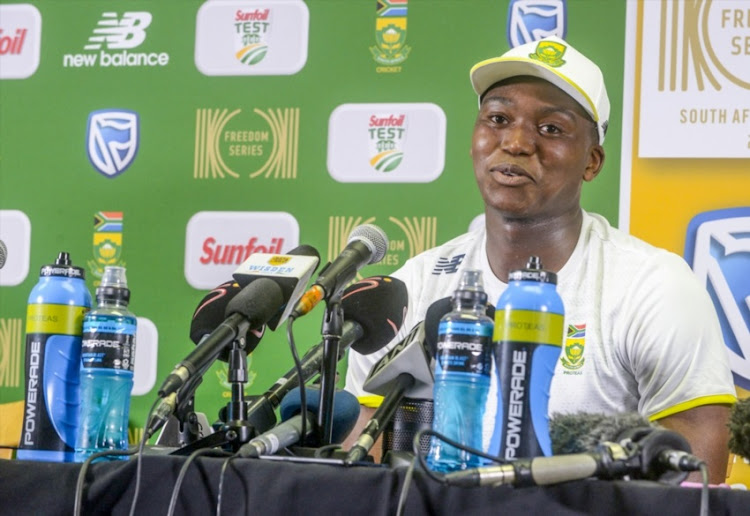 Lungi Ngidi of South Africa expresses his elation as he takes questions from the media in a press conference that followed his test debut, in which the tall Protea took his first wicket during day 2 of the 2nd Sunfoil Test match between South Africa and India at SuperSport Park on January 14, 2018 in Pretoria.
Image: Sydney Seshibedi/Gallo Images

The circumstances of Lungi Ngidi’s first appearance on a test scorecard won’t be remembered by many: faced four balls‚ scored one run‚ was not out.

The reason for his second entry is destined to remain vivid for a long time.

Cheteshwar Pujara thought there was a single to be had from the only ball he faced on day two of the second test in Centurion on Sunday.

His slide‚ pick-up-throw and direct hit on the stumps at the non-striker’s end‚ with neither Pujara nor his bat anywhere near safety‚ proved it.

Ngidi’s wide smile shone out of the giddiness that bathed the resultant thicket of high fives.

Not that he had earned his debut as a fielder‚ nevermind as a No. 11. He was in the side to bowl‚ and he got that chance in the 14th over of India’s first innings.

In his third over Ngidi let fly at 143 kilometres per hour at Murali Vijay‚ who sent an edge screaming groundward through gully.

At other levels of cricket the ball would have beaten the field and sped away for four.

Not at this level: AB de Villiers swooped and stopped it.

Ngidi stood watching at the bowling crease‚ allowed his eyes to widen with the wonder of it all‚ applauded‚ and smiled.

He thought he had his first wicket in his fifth over when Virat Kohli‚ no less‚ shuffled across his stumps and was rapped on the pads bang in front.

But‚ instead of a scalp‚ three runs were added to Ngidi’s figures. India’s captain had managed to get a smidgen of his bat onto the ball before he was struck.

Ngidi must have been disappointed. It didn’t show: he stood and smiled.

Four overs later‚ there it was — a delivery to a defending Parthiv Patel that left the left-hander off the pitch‚ took a healthy outside edge and smacked into Quinton de Kock’s gloves.

De Kock pointed one of those gloved hands at Ngidi and set off towards him with a yawp to celebrate with the fast bowler‚ who was duly mobbed by the rest of the South Africans.

The man himself seemed happy to stay trapped in the moment. As emotion erupted all around him he stood tall — 1.95 metres tall‚ mind — and smiled.

He will bowl better for less reward and worse for more‚ but he will never again have to wonder what it feels like to bowl in a test.

Not many are able to let go of that feeling after only 21 years and 291 days‚ and still fewer in just their 10th first-class match.

But not many are Ngidi‚ whose second name is True-man.

Who is the 99th man to be awarded a test cap by South Africa since readmission.

Whose parents are domestic workers.

Who earned his bursaries the hard way.

Who has beaten stymieing injuries to be where he is.

Who was halted‚ politely‚ on his way to his press conference on Sunday by an old‚ proud woman‚ a stalwart of being black in this country‚ who wanted — and was warmly given — a hug.

Because being Lungi Ngidi means you have a lot to think about‚ and even more to smile about.