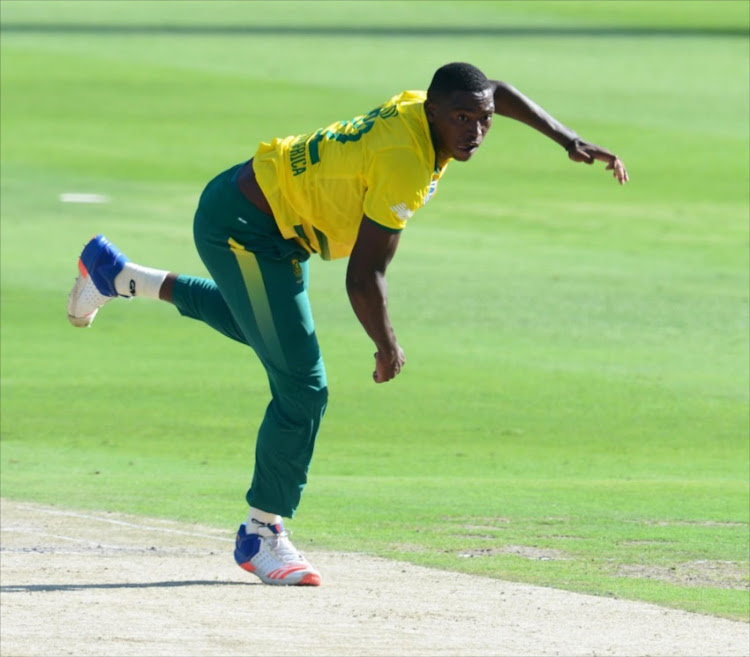 Lungi Ngidi of the proteas during the 2nd KFC T20 International match between South Africa and Sri Lanka at Bidvest Wanderers Stadium on January 22, 2017 in Johannesburg.
Image: Lee Warren/Gallo Images

Former Titans and Dolphins all-rounder Pierre de Bruyn‚ who recruited Lungi Ngidi from Hilton College to Tuks Cricket Club almost five years ago‚ hopes to keep his emotions in check if the fast bowler makes his debut in the second test against India at SuperSport Park on Saturday.

The 21-year old Ngidi‚ who played three T20s for South Africa last year against Sri Lanka‚ was called up to the Proteas squad by coach Ottis Gibson this week.

De Bruyn said if Ngidi is picked as a replacement for Dale Steyn‚ he will be happier than the Titans player.

“If he plays in his first test match on Saturday‚ I will definitely the happiest man inside the stadium and probably a little bit emotional‚" De Bruyn told TimesLIVE.

"He has come a long way since he was a little kid.

"I am abundantly happy for what he has achieved in a short period of time and I believe that he has a lot to offer because he is a special talent and a humble human being.”

De Bruyn said he found out about Ngidi from former Zimbabwe all-rounder Neil Johnson who was working at Hilton College where the Titans bowler was on a scholarship.

“I made a lot of effort to convince him to move out of the province because he was not willing to leave KZN.

"I went back to Durban a month later‚ sat him down again and asked him to trust me.

"I told him that he will continue to study at University of Pretoria and all his cricketing needs will be taken care of.

"Ultimately he agreed to come down to Pretoria and like they say‚ the rest is history‚” said De Bruyn‚ who has just returned from a coaching stint with Division Two side Leicestershire in the country championship in England.

“When I first saw video footage of him in action‚ my immediate reaction was that there was potential but his action was raw.

"However‚ I was convinced that we can work on his action because he had lots of potential to generate pace.

Ngidi’s former coach at Hilton College‚ Sean Carlisle‚ said he was not surprised by his rapid rise as he gave notice to his talents from the beginning.

“He came to us at the beginning of Grade 8 on a scholarship and he stayed with us until he finished matric‚" said Carlisle.

"He was a good kid to work with and we are very proud of what he has gone on to achieve.

"Credit must also go to the guys at Tuks who continued to look after him so that he fulfils his undoubted potential.”

Mandla Mashimbyi‚ the Titans assistant coach who also worked with Ngidi at South Africa U19 level‚ said he has always showed maturity beyond his age after two major injuries.

“When the U19’s won the World Cup in 2014‚ he missed that tournament due to injury and he also missed out on a possible T20 World Cup in England last year after he got injured against Sri Lanka.

"He is very quick‚ he has done well for himself and I hope he get his opportunity going forward in the test side‚” said Mashimbyi.