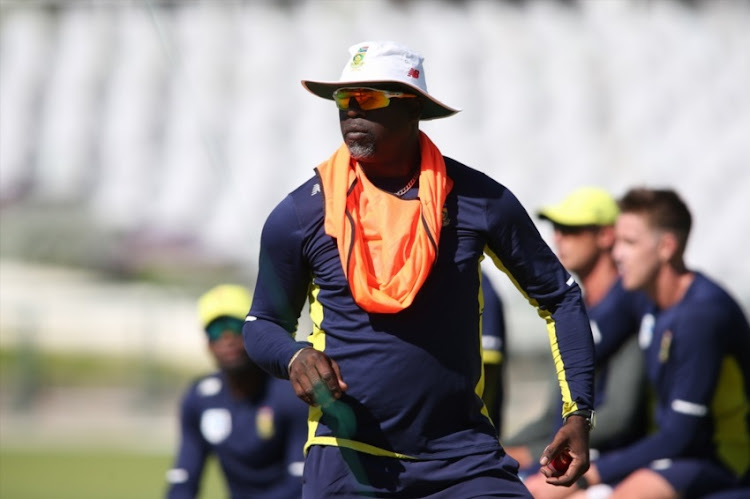 Overthinking and underdoing can stifle the strengths of cricket teams‚ making them better at talking a good game than playing it.

Maybe that’s why Gibson is relishing instilling what could be called a think less‚ do more approach in South Africa’s dressingroom.

That applies to his thoughts on bowling …

“I’m a very fast bowling-minded coach and I guess we will always have to find a balance: can we get four fast bowlers in the team‚ first of all. Are the conditions suited to four fast bowlers? If not we try and shape the team in other ways.

“Ultimately‚ especially in this series and for the rest of the summer‚ we will be looking to see how best we can fit four fast bowlers into whatever formula we come up with.”

… As well as on batting.

“If you think that‚ on a wicket like this‚ there’s always a ball with your name on it then the simple approach is to make sure you get your runs before that ball gets you. Try and play positively.

“Pitches will lend themselves to pace and seam movement and batsmen have to adapt‚ but ultimately once you’re there you’ve got to try and get runs.

“If you bat for 15 overs and score no runs and then that ball with your name comes‚ then you haven’t really moved the game forward.”

Gibson spoke as the dust settled on South Africa’s stirring victory‚ by 72 runs‚ over India in the first test at Newlands on Monday on a pitch that‚ while far from unfair‚ wasn’t shy about backing pace bowling.

The surface was part of the plan for beating opponents who owe their No. 1 ranking to the fact that‚ before the Newlands test‚ they had played 31 consecutive tests either at home or on similarly slow pitches.

Even the pitch‚ then‚ was part of the aggression South Africa brought to the match.

“It’s easy to say if you want to beat the best team in the world‚ which India are‚ then maybe we have to do something slightly different to what we’ve done in the past‚” Gibson said.

“We have to get stuck in and be tough with the bat and the ball. Get in their faces a bit‚ use our physicality in terms of our pace.

“We had in this game three guys bowling over 140‚ so use that and have a presence that says we are trying to get to where you are as a team.”

Two of those guys are Vernon Philander‚ who took a career-best 6/42 in the second innings‚ and Morne Morkel‚ who took four wickets in the match but more importantly kept the pressure on the Indians with relentlessly accurate bowling delivered at an uncomfortable pace and laced with awkward bounce.

The other guy is Kagiso Rabada‚ who let fly like he hasn’t done in months‚ claimed five scalps‚ and rose to the top of the test bowling rankings on Tuesday.

Whatever Gibson is doing — and thinking — it’s working.