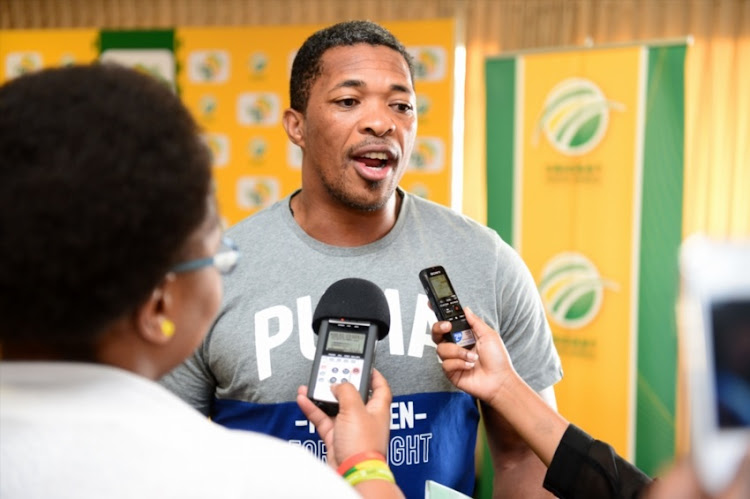 Makhaya Ntini (Ambassador) during the Africa T-20 Cup announcement at the Longroom at the Wanderers on August 27, 2015 in Johannesburg.
Image: Lee Warren/Gallo Images

Makhaya Ntini has accused Zimbabwe Cricket (ZC) of dishonesty over the end of his tenure as the national team’s bowling coach.

ZC issued a release on Sunday announcing “with regret” that Ntini had “tendered his resignation … with immediate effect”.

But‚ in an interview with Radio 2000‚ the former test fast bowler claimed he was worked out of his job by an unnamed “coward” who complained about his performance to ZC managing director Faisal Hasnain.

The board sent Ntini on his way with a glowing reference: “Since his appointment in February 2016‚ Makhaya has brought a wealth of experience and practical knowledge to ZC‚ and ZC and its players and coaching staff were fortunate to have had an opportunity to work closely with him during this period‚ and to learn from his many years of playing for South Africa at the highest level.

"Charismatic‚ ever-helpful‚ hard-working and always full of energy‚ Makhaya’s experience and immense knowledge of the game have helped to bolster the ZC national team into a competitive outfit that went on to record Zimbabwe’s first ever away one-day international series win over Sri Lanka in 2017.

“And while reluctantly accepting his resignation‚ ZC fully appreciates and respects the reasons behind Makhaya’s decision‚ and wishes him all the very best for the future.”

Ntini did not return the compliments in his interview‚ which was conducted on the telephone from his home in East London on Sunday.

“It’s a shame and I am sorry to say it‚ but I think [ZC] need to be very‚ very honest with what they say to reporters‚” Ntini said.

“The honest truth is that I didn’t resign. I received a text message from the MD‚ saying that he would like to talk to me.

“I sent him my local number‚ which is a South African number because I am not using the Zimbabwe number while I am at home.

“He didn’t call me. I reminded him on Saturday morning that I am still waiting for a call and then he called me.

“He reminded me of what we had a chat about four months ago regarding some of the players’ unhappiness.

“Some of the players and the staff members went to see him and reported that they are not happy with the job I am doing and that the job that I was given was not meant for me.

“From my point of view as a bowling coach‚ it’s who I am and I never change; I will forever be like this.

“If someone has a problem with me‚ he shouldn’t have come to you. He should have come to me first and said that to me and said‚ ‘Listen‚ this is what’s going on’.”

Ntini said he confronted the Zimbabwean players after his conversation with Hasnain‚ asking who “had a problem with me”.

“None of them owned up‚” Ntini said‚ and that’s is clearly sticking in his craw.

“Whoever has gone to the MD is a coward‚” Ntini said.

“He is not man enough to stand up for himself and say‚ ‘I need to talk to you’.”

Ntini saw a plot behind his departure‚ and considered Hasnain a mere cog in its machinations.

“He [Hasnain] is not the one making the decision‚” Ntini said.

“Someone is telling him [what to do].

“I asked him‚ ‘Please be honest and tell me who is this person that is saying things about me’.

Ntini has a reputation as an uncompromising coach who pushes players towards their mental and physical limits.

In an environment like Zimbabwe’s‚ where the depth of quality talent is more shallow than in any other test-playing country and players’ relationships with the suits are fragile at best‚ coaches are always going to be expendable.

Since Ntini’s appointment Zimbabwe have won 10 of their 34 matches and lost 21.

ZC were sent the transcript of Ntini’s interview and asked for comment.

“We have read the transcript and we have no comment‚” a spokesperson told TimesLIVE.