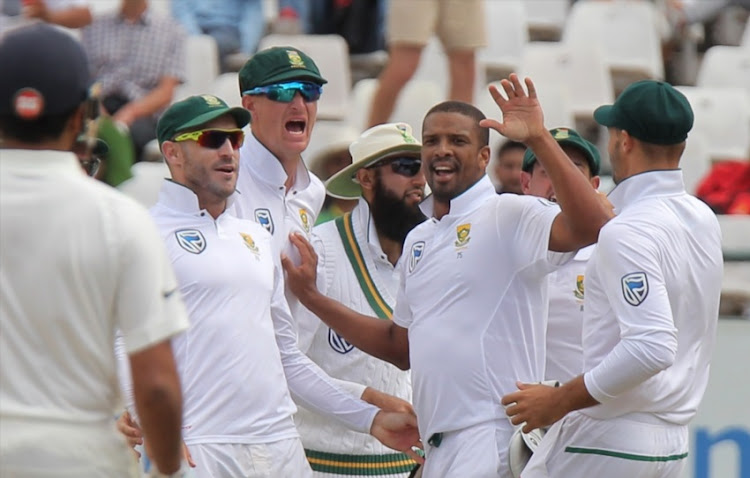 Vernon Philander of South Africa during day 4 of the 1st Sunfoil Test match between South Africa and India at PPC Newlands on January 08, 2018 in Cape Town.
Image: Petri Oeschger/Gallo Images

India’s batting line-up crumbled under the resolute pressure applied by South Africa’s pace attack on the fourth day of the first test at Newlands on Monday.

The Indians‚ who are chasing 208 to win‚ were 82/7 at tea — or 126 runs away from their rapidly receding destination.

With Kagiso Rabada‚ who claimed the other two scalps‚ also putting the Indians on the spot‚ the absence from the attack of the injured Dale Steyn has not been felt.

South Africa resumed their second innings on 65/2‚ and lost eight wickets for 65 runs in the 21.2 overs bowled in the morning session to be dismissed for 130.

The fall of the ninth wicket brought Steyn to the wicket 10 minutes before the scheduled lunch interval‚ and with him came rousing cheers for his commitment.

Steyn sustained a heel injury while bowling on Saturday by stepping awkwardly into a foothole and has been ruled out of the rest of the series and for up to the next six weeks.

He faced four balls before AB de Villiers holed out on the long-on boundary for 35 — South Africa’s top score — to end the innings and force the interval.

South Africa’s slide started with the ninth ball of the day‚ a wide delivery from Mohammed Shami that Hashim Amla chased and edged to gully‚ where Rohit Sharma scooped a low catch.

Amla went for four‚ and besides De Villiers only Keshav Maharaj‚ who made 15‚ reached double figures.

South Africa struggled against an India pace attack that‚ given helpful conditions‚ exploited them well.

Murali Vijay was twice given out to Philander in the first six overs of India’s chase‚ and both times he was reprieved by the decision review system.

Six balls after Vijay survived a second time Morkel had Shikhar Dhawan caught in the gully with a vicious delivery that reared up and looped off the splice.

Philander got his man six deliveries after that when Vijay tried to defend and instead steered a catch to third slip. Morkel had Cheteshwar Pujara caught behind with a sniping away swinger to reduce India to 39/3.

Virat Kohli and Rohit Sharma held up South Africa’s progress for 56 balls in their stand of 32 — which was ended when Philander trapped Kohli in front for 28.

Sharma should have been out when he top-edged Rabada to backward square leg‚ but Keshav Maharaj appeared to lose the ball in the sun and the chance was wasted.

Pandya hammered 93 with gusto in the first innings‚ but on Monday he was gone for a single when he edged Rabada to gully.