Five who could be famous in SA cricket 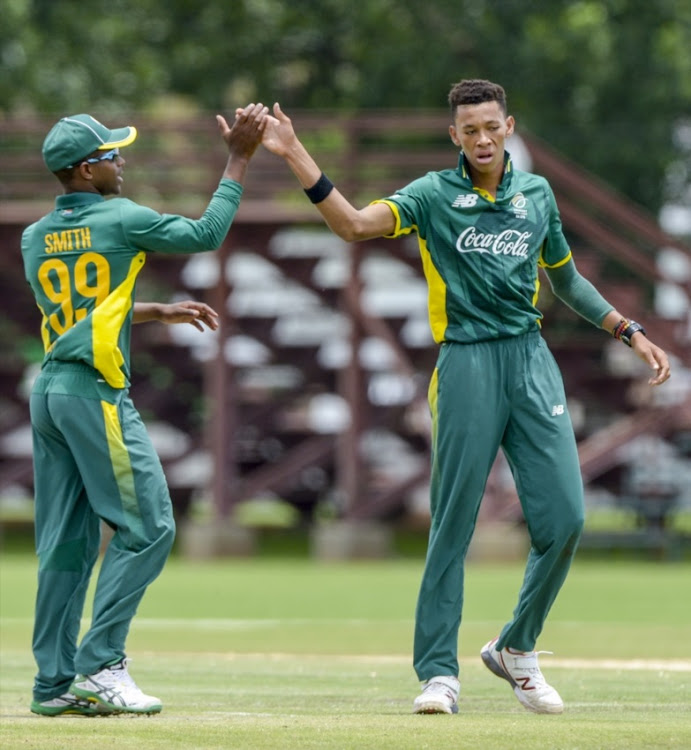 Thando Ntini of South Africa celebrates with teammates during the U/19 Tri Series match between South Africa and Namibia at PUK Oval on December 04, 2017 in Potchefstroom.
Image: Sydney Seshibedi/Gallo Images

Cricket in South Africa faces many challenges, but a supply of quality talent isn’t among them.

Here are five of the best young players the country has to offer.

In the days when Makhaya Ntini was the heart of South Africa’s attack, the corridors of the national team’s hotel were often filled with happy noise. It was the sound of Thando Ntini growing up like few children do.

Now Ntini junior is indeed grown up with places to go — like the under-19 World Cup in New Zealand in January and February.

If you happened to walk past a particular room in Potchefstroom in the days before the first test between South Africa and Bangladesh in September, you would have seen Wiaan Mulder listening attentively to selection convenor Linda Zondi.

A month later the allrounder made his one-day international debut against the Bangladeshis in East London.

Clearly, he listens well. That’s unusual for 19-year-olds. But, with two centuries and a five-wicket haul to his name in first-class cricket, Mulder is no ordinary teenager.

In the space of 15 days in November and December, Breetzke reeled off scores of 59 and 94 in in first-class and list A games for Eastern Province against Border, and made 51 not out, 52 and 101 for South Africa’s under-19 team in one-day matches against Namibia and England. And, yes, he scored his century against the English.

Look out, under-19 World Cup, here he comes.

Seven centuries and 79 wickets in 51 first-class games says Muthusamy can play. And, as a frontline batsman and a decent left-arm spinner, the KwaZulu-Natalian has marketable skills.

That was amply evident in a list A game against Western Province in Cape Town in December, when he batted at No. 5 for his 95 off 106 balls and took 4/56.

Williams has claimed six five-wicket hauls and a ten-fer in his 42 first-class matches, invariably with tight seam bowling at decent pace and with enough inswing to keep asking question.

He showed what he could in a day/night tour match against Zimbabwe in Paarl in December, when he took three wickets in four balls for a South Africa Invitation XI.