Pink ball create challenges that cricket will have to address 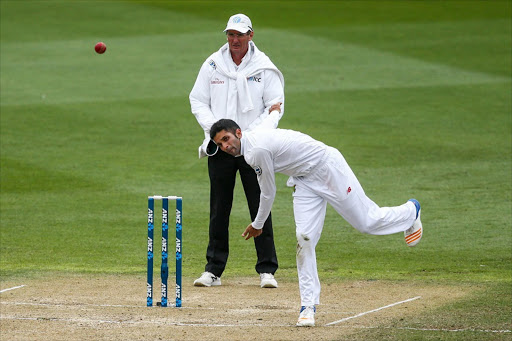 A funny thing happened at St George’s Park on Tuesday a moment after Zimbabwe’s Chris Mpofu had Keshav Maharaj caught in the gully to reduce South Africa to 309/9.

With that AB de Villiers declared‚ which wouldn’t have happened in the first innings of almost any test.

But this wasn’t almost any test.

For one thing‚ the ball was pink and for another it was 8.08pm.

For still another‚ De Villiers had seen enough of the ball swerving and verving outrageously as dusk settled to know that he wanted his sniping seam attack of Morne Morkel‚ Vernon Philander and Kagiso Rabada to have a crack at the Zimbabweans more than he wanted additional runs in the bank.

And he was right‚ by stumps the visitors had slumped to 30/4 on their way to a total of 68.
Less than 24 hours later‚ having followed on‚ they were on their way home having been thrashed by an innings and 120 runs inside two of the scheduled four days.

“The way the ball moved around [on Tuesday] evening‚ even when we bowled‚ something started happening when the sun went down and the lights came on‚” Zimbabwe captain Graeme Cremer said.

The timing and circumstances of De Villiers’ declaration was the kind of paradigm shift test aficionados will have to get used to as the newest version of the oldest format gains traction.

“I think that will play a big part in day/night tests‚ declaring a bit earlier or a bit later‚ because every seam attack will want to bowl at night.”

And that’s not all.

“It’s also‚ during the day‚ about not pushing your seamers too hard and keeping them for that night period‚” Cremer said.

Even as the wickets tumbled on Tuesday‚ Cremer was trying to stay ahead of his steep learning curve.

“We had four of our tailenders padded up in the changeroom to get them out the way and to give our batsmen a chance [on Wednesday] during the day‚” he said.

Bowlers might find themselves working on their batting more than ever — not least because‚ perversely‚ they could end up bowling too well.

“We would have batted [on Tuesday]‚ because even if you bowl first and you bowl well and dismiss them in 70 overs you’ve still got to go and bat under lights‚” Cremer said.

“We joked out there that we need to stop getting wickets so that we have more time to bat [in daylight the next afternoon].”

Not that batting was straightforward at any stage of the day/night on a pitch that was unusually grassy and responsive considering St George’s Park’s reputation for benign surfaces.

The Zimbabweans proved that by losing their last eight wickets for 28 runs in the space of 72 balls in their disastrous second innings of 121.

A total of 2 352 deliveries were scheduled to be bowled in the match‚ but it was decided in 907 balls.

Embarrassingly for the visitors‚ floodlights were not needed on Wednesday‚ when the match was concluded at 6.05pm.

In fact‚ they lost 16 of their 20 wickets in broad daylight.

But Aiden Markram‚ who anchored South Africa’s first innings with his 125‚ concurred with Cremer that a lot went down once the lights came up.

“We had some night practices here‚ and it was incredibly tough facing Morne‚ ‘Vern’ [Philander]‚ and ‘KG’ [Rabada] in the nets‚” Markram said.

Given all that‚ should the feats achieved during pink-ball tests be recorded separately to avoid the risk of contaminating the records of the venerable red-ball stuff?

“I see it as the same‚” Markram said perhaps anxious for his century to retain its status.

That’s not to say the pink ball doesn’t create challenges cricket will have to address.
Might the batting be opened by middle or even lower order batsmen to save the proper players for when the sun sets?

Could the toss be scrapped to allow the team who are ranked lower or have been in the worse form in their previous five tests to bat first?

Why not play the same test on two separate pitches prepared on the same table: a green and grassy surface for daylight hours and a rank flattie for when the sun sets and the magic happens?

Traditionalists will sneer‚ but the questions that day/night tests ask players are not that different from what they have to do to adapt to contrasts in conditions.

India’s star off-spinner‚ Ravichandran Ashwin‚ for instance‚ is twice the bowler in Asia compared to when he bowls on faster pitches.

Funny things happened at St George’s Park on Tuesday‚ and indeed on Wednesday.
And they will continue to happen every time the ball is pink and the lights are on.
Until‚ that is‚ cricketers find a way to spoil the fun.

As the minutes ticked away to Kyle Jarvis letting fly the first pink ball of the match to Dean Elgar at St George’s Park on Tuesday‚ two men sat in ...
Sport
3 years ago

Despite the postponement of the Global T20 league‚ Cricket South Africa (CSA) president Chris Nenzani believes the year has been a good one for the ...
Sport
3 years ago

South Africa exposed just how weak Zimbabwean cricket is when they wiped the floor with them in less than two days of their day-night‚ pink ball test ...
Sport
3 years ago

AB de Villiers's motivation for returning to test cricket is to help Proteas regain the number one position.
Sport
3 years ago
Next Article