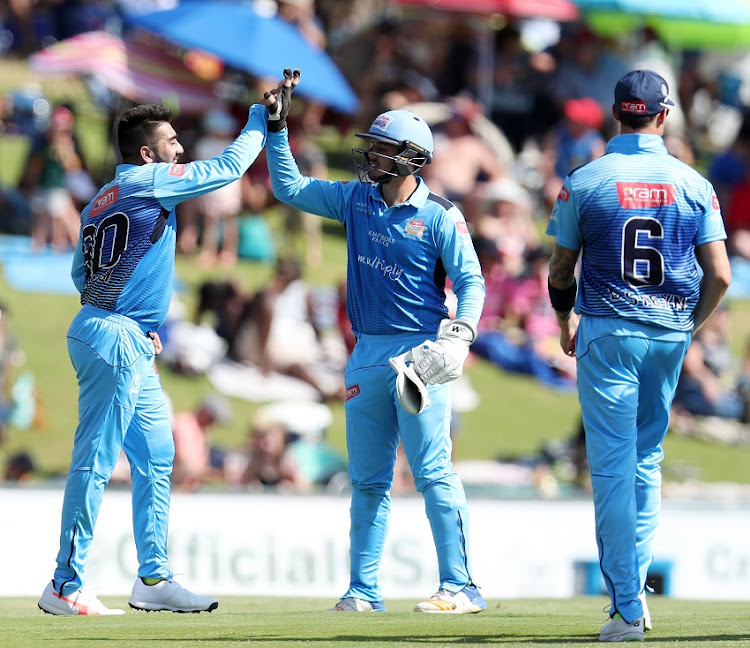 Chris Morris was colourful in his description of his warm-up but things soon clicked as he set about recording the best ever figures in a domestic T20 final on Saturday.

Having recovered from a serious back injury‚ the allrounder’s 4/13 helped the Titans power to a seven-wicket victory over the hapless Dolphins.

“It is very satisfying especially after taking some tap in the last couple of games‚” said Morris.

“The action was nice and the rhythm was good. In the warm up I felt rubbish.

"Something felt sore‚ my back felt stiff. Nothing felt right.

“For some reason it all clicked when I ran in to bowl my first ball. I hit the deck and it swung. I’m very lucky it came out right.

"It was just my night‚” beamed Morris‚ who quickly acknowledged the contributions for his colleagues.

“It could very easily have been Lungi Ngidi’s night. Malusi Siboto’s double wicket maiden‚ that changes a final.”

Morris went on to say "the pressure never left the Dolphins" and indiscretion in their shot selection duly followed for the team who knew they had to push the envelope against the Titans.

“I will never regret that we had to come and play a positive game here.

"You can’t sit on the fence. We had to take better decisions and our players will only be better for it down the line.

"Some of our players will hurt but they will learn. Muhammad Ali said ‘you only learn when you’re in pain’. We will come back better for it.”

Did he feel his team was under cooked given the number of no results they had to endure this season?

“We don’t want to go that route‚” said Morgan.

“It was set in the stars the way we came into the final. In previous years the weather has set up against us in Durban.

"We are privileged that we snuck through‚ although I believe we deserve to be there.

"We had to come and play this way but unfortunately we didn’t execute well enough at key moments.”

For Titans coach Mark Boucher the victory was a personal triumph.

It also brought a fair amount of vindication after some of his methods were questioned.

It had been suggested‚ primarily in the Cape‚ that the Titans in selection and execution had deliberately gone below full throttle in their last league match in Durban.

The Dolphins’ victory cost the Cape side in their bid to reach the final.

“I wasn’t too worried about what was being said but what upset me was the way in which it was said... to insinuate that we are throwing games.

" I wouldn’t walk onto the field‚ or take this job if I was prepared to throw a game. That upset me quite a bit. I’ll defend that until I’m blue in the face.

“It’s gone now so maybe people can say it was the right decision.”

Why has the Ram Slam T20 attracted so many viewers?

Local cricket fans appear to have put the disappointment of the postponed T20 Global League behind them.
Sport
3 years ago

Cricketminded types looking forward to the brave new world of four-day‚ day/night test cricket might want to swot up on the regulations that will ...
Sport
3 years ago

Cricket SA (CSA) yesterday announced the 15-strong South African U-19 squad for the ICC World Cup in New Zealand in the New Year.
Sport
3 years ago
Next Article