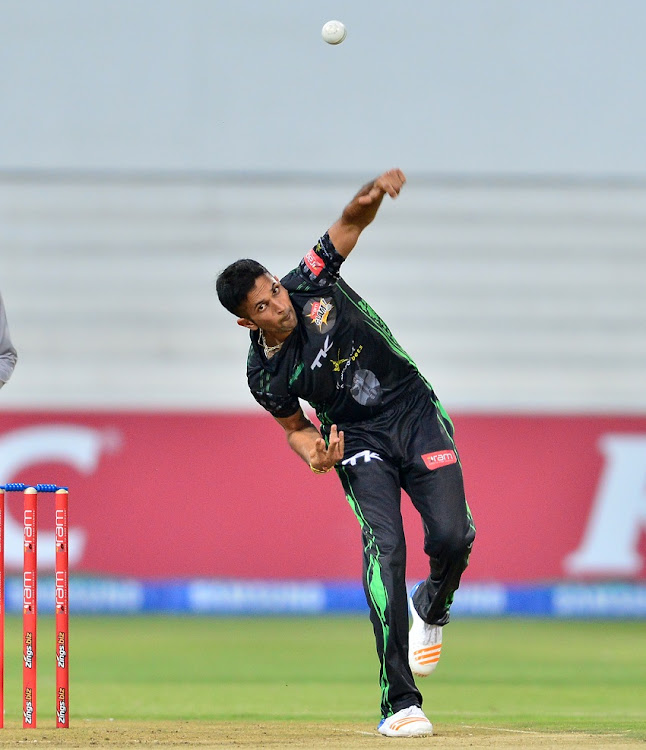 Keshav Maharaj of the Dolphins bowls during the 2017 T20 Ram Slam match between Dolphins and Cobras at Sahara Stadium Kingsmead, Durban on 01 December 2017.
Image: Samuel Shivambu/BackpagePix

That’s not a joke: it’s been serious stuff in all four of the Dolphins’ completed T20 games this summer.

And with enough success achieved to suggest that the left-arm spinner will be a new-ball option if he plays in the format for South Africa.

In his 13 tests Maharaj has not only proved himself as a bowler at the highest level but earned a reputation as a player with the skill and intelligence to take on most roles in all disciplines.

Maharaj can bat — whether he’s nurdling it or nailing it — can bowl — attackingly and defensively — and can field — square of the pitch and in the deep — and he looks and‚ more importantly‚ performs like a man with a plan.

So it shouldn’t surprise that he has taken‚ not even shared‚ the new ball for the Dolphins consistently.

In 11 overs in that guise this season Maharaj has claimed three wickets at an average of 27.00 and an economy rate of 7.36.

Those are hardly figures to build an argument on‚ especially in a competition that has highlighted the quality chasm between the international and domestic levels.

But a deeper look suggests otherwise.

Maharaj’s three victims have been Temba Bavuma‚ Hashim Amla and Jon-Jon Smuts‚ big fish all‚ and he has conceded double figures in his first over only once.

That was against the Lions in Potchefstroom last month‚ when Reeza Hendricks smacked him for three fours and dished out much the same treatment to the rest of the attack on his way to an undefeated 102.

So‚ considering the format and the conditions — Maharaj dismissed Bavuma in Centurion and Amla at Kingsmead — he has given the national selectors plenty to think about.

Of course‚ he will have to get past his Dolphins teammate‚ Imran Tahir‚ if he wants to be South Africa’s first-choice T20 slow poisoner.

Unless‚ that is‚ the national team take a leaf out of the KwaZulu-Natalians’ book and pick both‚ as they have done in all of Tahir’s matches.

Not that the stalwart leg spinner has made too many rip-roaring celebratory trips into the outfield this summer: in three franchise T20s‚ in which he has bowled nine overs‚ he has gone wicketless for 89 runs.

All told‚ Maharaj has claimed almost a third of his T20 wickets — 15 of 53 — when he has taken or shared the new ball.

He has sent down more deliveries as the fourth man in the attack and taken 18 wickets as the fifth bowler‚ but his economy rate up front is a smidgen better than when he bowls fourth or fifth.

And we know he is more than clever enough to learn additional tricks of the new-ball trade.