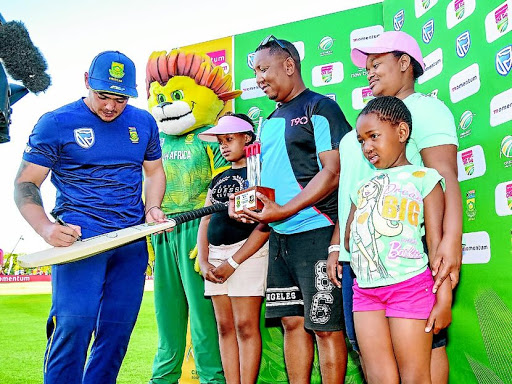 Renewal of the five-year sponsorship between Cricket SA (CSA) and Momentum will see more cricket games aimed at developing the game.

Earlier this year, Momentum Friendship Matches - which are essentially the partners' efforts at upskilling CSA's development hubs and regional performance centres by getting them to play against traditional cricket schools - only numbered three.

As Momentum head of sponsorships Carel Bosman explained the emphasis is less on the results than it is on the impact of the occasion going forward.

"There is the bigger picture for us where we can be involved with cricket from a development level, into club cricket, domestic cricket and international cricket.

"We hope the day arrives when we see one of these young players go all the way, but of course, sport does much more than that," Bosman said.

This month, there will be three matches as the programme picks up steam, with schools clashing from ages under-13 to under-18.

CSA co-ordinator David Mokopanele said: "The camaraderie has been great, the traditional schools are keen to be part of this and contribute positively towards the development of the game in previously disadvantaged areas."

To kickstart this season's matches, Alexandra Hub will play against St Stithians in Randburg today at 4pm.