Fortuin v Simwaka round two on the cards 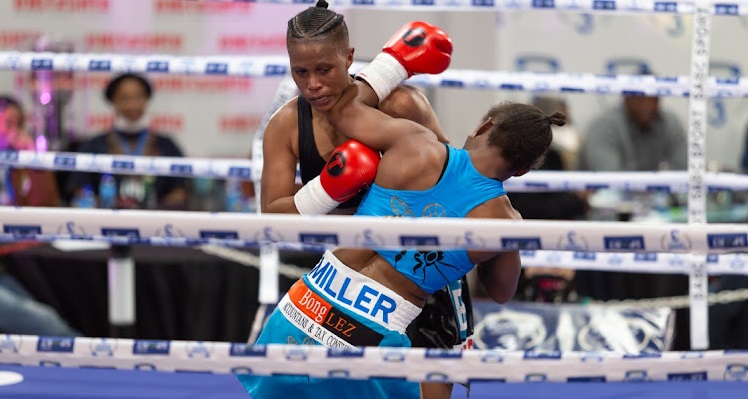 The scarcity of women boxers is becoming a serious problem facing the sport.

While many promoters blatantly refuse to include women contests in their tournaments, those that try to assist by giving female boxers a chance at action now have a gigantic headache in putting together decent matches.

This has forced a number of them to match some boxers three times against each other, and that is shortchanging the fight fans.

Right now fans must brace themselves for the second installment between SA bantamweight champion Sharadene Fortuin and Ellen Simwaka.

Their 10-rounder will take place at The Galleria in Sandton where promoter Sfiso Shongwe’s Walt Disney Africa Company will stage its international tournament on May 26. Fortuin and Simwaka fought in 2017 in Mdantsane where Fortuin defeated the SA-based Malawian in a non-title fight.

At least this time they will fight for the IBF Continental Africa bantamweight title which is vacant.

In her last fight in January, also under Walt Disney Africa Company whose tournaments are televised live by ESPN Africa – Simwaka stopped Tshabalala in two rounds to better her record to seven stoppages in nine wins against five losses.

Fortuin was also active. The boxer – who dethroned Miller as the national champion in 2021 – retained her belt against the same opponent in December. That was the former IBO champion’s 13 victories with three knockout against a loss to Nonina and a draw with Asandiswa Nxokwana.

Shongwe has afforded Patrick Mukala the opportunity to make a comeback since the SA-based Congolese has not fought for over two years. Mukala, who was stopped in round seven by Rowan Campbell in 2019 in Kempton Park, has been matched with homeboy Apanu Stanis.

In this fight, Mukala will be making his debut under trainer Jodi Solomon. The hard-hitter who boasts 10 knockouts in 11 victims has only two losses. On the other hand, Apanu has four wins and three losses.

He, too, has not seen action for almost two years since he was stopped in his last fight by Frank Rodriguez. Their proposed super middleweight fight is scheduled for eight rounds.

Women’s boxing struggled to gain a foothold with local fans, and Boxing SA director Mandla Ntlanganiso got it all wrong when he said it is a new ...
Sport
3 months ago

History should spur on BSA 2017-18 prospect of the year and current SA flyweight boxing champion Smangele “Smash” Hadebe to do everything possible in ...
Sport
3 months ago

Fortuin’s victory put to rest doubts of her being done a favour by two judges in their first fight at Booysens Hall in August. The third judge scored ...
Sport
5 months ago

Box-and-dine has become a fashionable concept in SA boxing. It started about 30 years ago as part of development tournaments and has completely ...
Sport
5 months ago
Next Article